At BestHorsePractices, we connect equine research with everyday interactions. We share the discoveries of good research and its implications with Regular Joe’s. 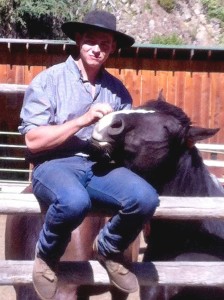 Follow Fred is a regular BHP feature. It concerns the work of one man with his feet firmly in both BHP camps: horsemanship and science.

Fred Holcomb, a recent graduate of Davidson College, has excelled at English and Western riding, including a lengthy stint at the Alvord Ranch with Martin Black and seminar work with Black and Dr. Steve Peters.

While the rest of us were tossing hay and saddling up, Fred Holcomb was hunched over a computer, scrutinizing data and crunching numbers.

The 22-year old researcher was analyzing videotape from scores of timed training sessions executed last summer at the HF Bar Ranch in Saddlestring, Wyoming. Read more about the trials here.

Holcomb’s work is filling a sizeable gap in current research on how horses learn best. He’s looking at how recess time between training sessions affects learning. In other words: Should you give your horse a break, when it’s struggling to learn about crossing a tarp, opening a gate, or sidepassing? 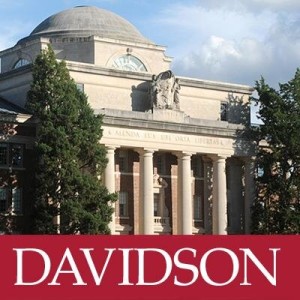 The answer, according to Holcomb’s preliminary findings, is a resounding “YES!”

The Value of Taking a Break

Remarkably, almost no academic research has been published in this area of equine cognition or learning behavior. Holcomb’s most relevant reference of comparable work came from a crude, some might say cruel, study involving ponies, small hurdles, and mild electrical shocks, in 1980. Read more here.

Needless to say, Holcomb’s work was undeniably more humane, more relevant, and more successful in terms of conclusive results. While the research project was displayed at an academic conference and may eventually be published in an academic journal, it can be put to immediate use with every horse owner in her backyard, arena, and on the trail.

Why Fred’s work is special

Science is about observation and testing, sure. But it’s also about knowing your subjects intimately before you form a hypothesis, design a project, and start collecting data. As Dr. Frans de Waal noted here, researchers can’t ask good questions until they really, really know what they think they’re seeing. Researchers fail us when they don’t have those close encounters. 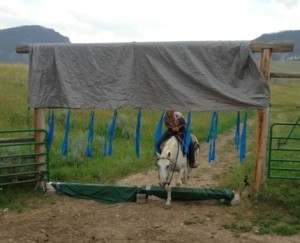 Front view of horse working through the obstacle

Or, as colt starter Mike Kevil told me, “Scientists may miss or ignore the small subtleties – things obvious to a horseman.”

Those things were obvious to Holcomb, too, because he readily swaps his board and mortar for a cowboy hat. The Virginia man has spent time with Martin Black at the Alvord Ranch, and for the past several summers has wrangled at Wyoming ranches. He also attended Evidence-Based Horsemanship seminars led by Dr. Steve Peters and Martin Black. Evidence-Based Horsemanship is a book and concept that balances equine neuroscience with horsemanship. 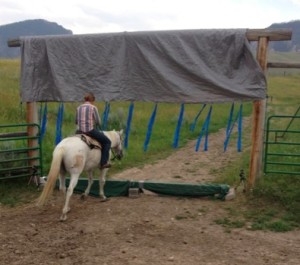 He directed a rider to ask HF Bar ranch horses to cross an obstacle (simultaneously stepping over a beam, passing under a tarp and passing through strips of tarp). In one group, the rider asked the horse to cross the obstacle for the entire allotted time (four minutes). In another group, the horses were given breaks after two minutes. In graph at right, the two groups are termed “massed” and “spaced,” respectively. Read more here.

This latter group was almost three times as successful in achieving the task. In other words, horses allowed to pause and rest were significantly more successful at learning to cross the obstacle. 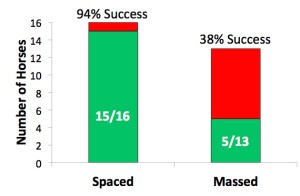 The months of video analysis and coding paid off with a conclusive result that echoes what the Dorrance brothers might have uttered years ago: “Colts are like third graders. They need recess.”

At the Comparative Cognition conference, Holcomb learned that many scientists focus first on their question and then search for a species that will best answer that specific question. The new graduate comes at his research from a completely different perspective: “I have a million questions about one species,” he said. “I have a passion for the horse. With horses, there’s so much opportunity for applied work compared to working with pigeons or rats.”

Graduate school is in the future. But first, he’s heading back to Wyoming for a season of wrangling and may head to farrier school at Montana State University this fall.

“My biggest fear is to be an animal behaviorist who doesn’t know how to deal with his own subjects,” he said. “There’s so much to learn by being on them.”

Presenting a poster at an academic conference is a bit like manning a trade show booth or info center desk. Explains Holcomb: “Posters are visual props used to briefly present research. I stood by my poster during the open poster fair, so that people could walk by and briefly read about the research and engage the presenter (me) to hear more about the project.”