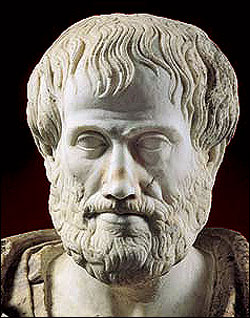 If you want to measure a horse’s smarts, don’t give it math problems or ask it to distinguish musical genres.
Instead, test its ability to solve horse problems.

Dr. de Waal chastened his peers for anthropomorphism and urged all scientists, equine researchers included, to know their subjects intimately before conducting research. His essay on animal intelligence was published in the Wall Street Journal.

For the last two thousand years or so, we’ve put ourselves at the top of the intelligence tree. Aristotle, Darwin, and others developed an order and rank of all living things. Humans fell just shy of angels.

All the other animals fell below us.

All others lacked souls. They were bereft of a sense of identity or a moral, emotional nature. Read about compassion.

The intelligence tree is more like a brambly, knotty bush 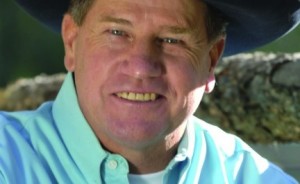 How accurately you measure and define animal intelligence depends on how well you know your subjects.

“We have grossly underestimated both the scope and the scale of animal intelligence…Experiments with animals have long been handicapped by our anthropocentric attitude: We often test them in ways that work fine with humans but not so well with other species.”

Anyone can be blinded by ignorance and hubris; equine researchers are no exception.

“If they don’t know what it means, it means nothing to them.” 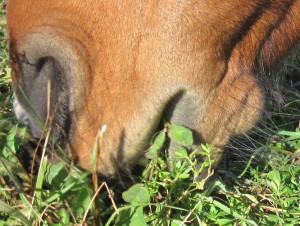 “If I walk through a forest… and fail to see or hear the pileated woodpecker, am I permitted to conclude that the bird is absent? Of course not. We know how easily these splendid woodpeckers hop around tree trunks to stay out of sight…Absence of evidence is not evidence of absence.”

To uninformed observers, it’s just grazing.
But watch closely and you’ll see the horse selecting one grass over another, spitting out unsavory plants. It learns and categorizes smells and forage spots, scans the horizon, registers sounds typical to field and season, and stays mindful of its herdmates. 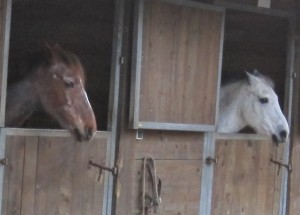 It eats and drinks and moves about. To the uninformed, the horse is fine.
But those familiar with wild or unconfined horses may have a different perspective. By comparing behaviors, bloodwork, and vitals, this horse may be more stressed and less healthy than its unconfined brethren.

“I would argue that the horse was in fact very smart,” says de Waal. “His abilities at arithmetic may have been flawed, but his understanding of human body language was remarkable. And isn’t that the skill a horse needs most?”

Along the same lines, who more accurately assesses your nervousness or confidence level – a horse or a fellow human?

Stephen Budiansky, author of The Nature of Horses, writes articulately of our biased view of intelligence:

“In our culture, we tend to think of an ability to solve problems or to quickly make connections or to assimilate new information as more important signs of intelligence than a good memory (thus the respected absent-minded professor) …we tend to dismiss innate mental skills from the equation.
“When comparing the intelligence of different species, though, it behooves us…to consider all the functions that an animal’s brain is called upon to perform before we pass judgment on its mental ranking in the animal kingdom.”

We humans are predators and we tend to think more highly of fellow predators, posits Budiansky. We’d probably rank those in the dog family, like mice-eating coyotes, above grass-eating horses. He writes:

“…Problem solving is part of the survival kit of a [predator] that lives by anticipating the complex and highly varied actions of elusive prey. Mice move and hide, grass doesn’t.”

But learning, Budiansky writes “is survival in a changing environment where the rules are not fixed.”  And horses learn well.

At a clinic in Europe years ago, Leslie Desmond recalled turning about eight horses loose and letting them move around the arena together. 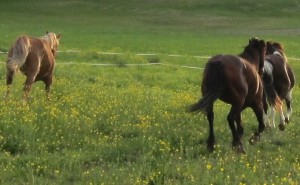 Her audience – full of equine researchers, behaviorists, and published authors – was “open-mouthed in disbelief” and told her it was downright dangerous.

“What it showed me was that they didn’t really understand that the horse’s basic nature is to get along,” said Desmond. “My stumbling block regarding equine behavior research coming out of universities and academia is that it seems like they don’t know horses as well as good horsemen. One would like to support equine research for the betterment of the species, but it’s hard to get behind it when they don’t seem to know what they’re talking about.”

Just as approaches to horsemanship have evolved from domination to partnership, equine researchers are beginning to test horses from horse perspectives.

“Scientists are now finally meeting animals on their own terms instead of treating them like furry (or feathery) humans, and this shift is fundamentally reshaping our understanding,” 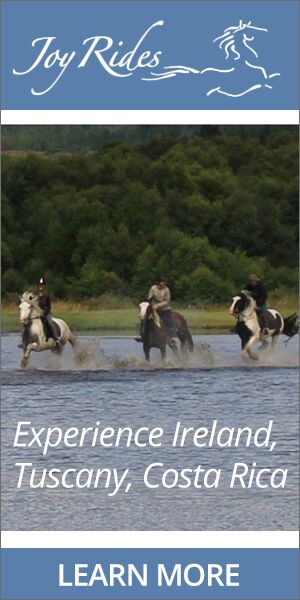