Among the students at this weekend’s Evidence-Based Horsemanship seminar was 20-year old college student, Fred Holcomb.

Holcomb doesn’t just have a passing interest in horsemanship and equine science. The Davidson College junior is one of the few to pair his passion for horses with an equally keen drive for applying objective, science-based rigor to 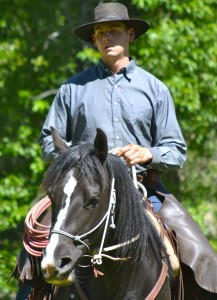 Dr. Steve Peters said Holcomb may likely be “one of the future flag bearers for this kind of study.”

As a boy, Holcomb sought riding opportunities wherever and whenever he could.

“It must have been a surprise to my parents,” said Holcomb from the Davidson campus in Davidson, North Carolina. “Neither are horsey at all. We grew up in the suburbs. But from Day One, I’ve always wanted to ride.”

At home in Virginia, he took English lessons.

In Idaho, where his family spent summer vacations, he rode Western.
He’s worked for seven summers at Elk Creek Ranch in Cody, Wyoming. There, he started his first colts and led pack trips.

His prized possession?
Not an iphone or a car. It’s the McCall 98 wade saddle he received as a high school graduation present.

At Davidson, Holcomb is pursuing a degree in psychology with a concentration in neuroscience. This year, he is working to develop his senior thesis on equine cognition.
Psychology professor, Dr. Kristi Multhaup, is working with Holcomb to hone his interest and shape this summer’s research project. His senior year will be spent evaluating and defending that research. 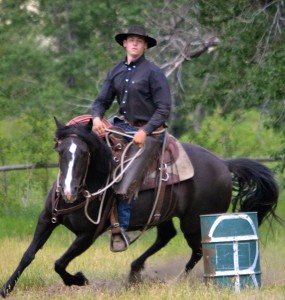 “One of the joys of being a professor at a liberal arts college is helping talented students make connections across traditional boundaries.

In Fred’s case, the boundary between academic study and horse training skills is being bridged with his thesis.
I fully expect Fred to use his thesis as a starting point for a career that increases communication between academic research teams and horse trainers, to the benefit of both groups.  I am lucky to play a small role in launching what promises to be a productive career.”

“I’ve come to recognize the need for some objectivity within the training world. There’re a lot of opinions out there. That’s where I think Steve and Martin’s work has been awesome. It’s really affected the academic path that I’ve chosen in college.

The need to balance the experience and vision of the horseman with the academic experience and credentials of the scientist is important… I’d like to reach a certain level of competence with both ends of the spectrum – in the scientific world and the training world.”

We’ll be rooting for you, Fred.