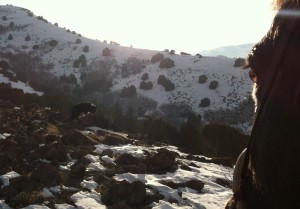 Development of our Ride Along Dog took a long pause as we moved from Iowa to Utah last year. However, after a few outings here, Kip, the young Australian Shepherd, is making great strides.
Partial credit is due to the new use of an electric collar instead of a squirt bottle to discipline her.
Let the critics cry foul. I’ve found that the mere wearing of the collar encourages Kip to adhere more closely to rules and commands she already knows. It’s a bit like having cameras at road intersections, where drivers become newly accountable for their actions.
Many professionals use electric collars to train sport dogs. It provides a way to check the dog in off-leash situations. From my experience, it’s humane.  (Obviously, like any tool, the collar can be misused and abused in the wrong hands.) If the dog vocalizes in any way, the signal is too strong. Most often, Kip tilts her head when I press the button.
She knows she’s wearing it. Her behavior modification is not unlike that of a horse who sees its rider carrying a 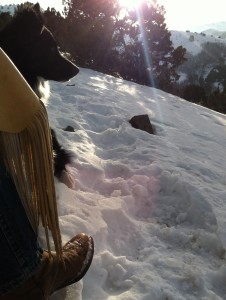 whip. Research shows eventers who carried whips but didn’t use them were more successful than both non-whip carriers and whip users. Read more.
Positive reinforcement is key. Kip gets tossed treats frequently when she’s jogging alongside. When she makes the mistake of getting too close to the horse’s back feet, I say, “No. Go on.” If she gets perilously close and starts riling the horse, she gets a collar warning. When she adjusts and comes along side us: more treats.
On a recent outing, I resorted to using the electric collar just twice over a span of two hours. Each time, she was getting just a tad too excited by our speed and was putting herself in harm’s way (at the horse’s heels).

What’s even better than the progress?

Now that horse, rider, and dog understand the game better, everyone’s having a blast.

Posted in Safety, Training and tagged dogs, horse and rider.