My first trail ride with the new mule was successful if success can be measured by staying on and nothing bad happening.

But Jolene’s lack of bend and the absence of a one-rein stop revealed glaringly large holes in training. 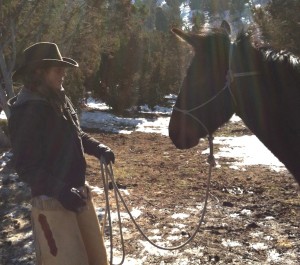 So, we added two elements to our work:

Given the precarious state of our “successful” first ride, I was more than a little nervous about getting back on. But with coaching and encouragement from Steve Peters, I banked on my progress, pushed back fear, and got on.

Not surprisingly, Jolene wanted to take off within the first 10 seconds. But I shortened my left rein and pulled 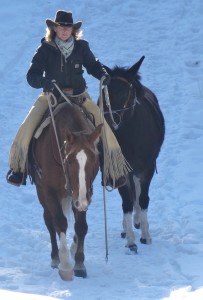 After five spins, she stopped. I released, nearly throwing the rein back to her. I rubbed her neck to comfort her.
We paused for a moment, allowing me to get undizzy before resuming our walk.

Almost immediately, she tried to bolt again. But I was ready with a one-rein stop. This time, she only spun three times before standing. Again, I offered her an immediate release.
It turned out to be one of those pivotal, memorable rides where horse and rider start in distant waters and end up together on an idyllic isle. After 15 minutes of consistent pressure, release, and positive reinforcement, something clicked. Jolene relaxed. I relaxed. (Up to then, I had had a veneer of confidence; only pretending to be competent and relaxed.) Jolene’s gait smoothed. She started looking around. She even stopped to graze.

Read more about confidence in riding.

Over the course of an hour, there were several times I could have jerked the reins or restricted her movement. Unlike past rides when fear had the best of me, I resisted those impulses. The reward was huge: a relaxed, seemingly happy and trusting new partner.

On a second outing, we headed out solo. Jolene tried to bolt several times and our Taz depiction returned, especially when a frightening stick got caught in her tail. But the rein pressure, quick release, and loving neck rubs prevailed.