If progress is measured by two steps forward and one step back, then this summer would follow perfectly along that zigzagging course. 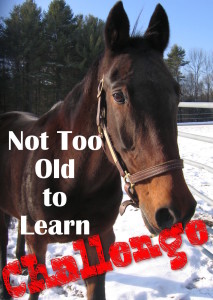 Recently, Jolene and I have successfully partnered up several times a week to tackle our weak points:

She’s more comfortable with having a horse behind her on the trail.

She can pony another horse without panicking.

She can carry a packsaddle.

She can stand and bend and stop with light or no touch on the reins. 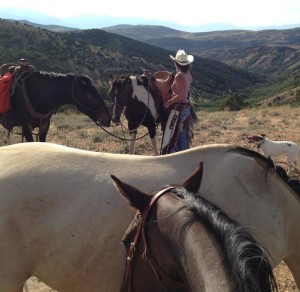 So, it was with joyful anticipation that I saddled her and Pep for a long trek into the Oquirrhs with friend, Raechel Nelson. It’d be a celebratory summer ride, since we both felt these glorious days were winding down and darned if we didn’t make the most of them. It’d be a 16-mile ride with about 2,000 feet elevation climb over rugged, ledge-y terrain with temperatures approaching 90 degrees.

We were quite a crew since we each decided to pony one horse and ride another. We took our dogs. Plus, I took Wallace, the burro. [Wallace has made great progress since we acquired him from the BLM last fall. He seems to LOVE coming on trail rides at liberty, not unlike Donquita in Unbranded.]

Jolene wore the packsaddle, full of water and goodies for humans and animals, and she followed contentedly behind Pep.

After three hours, we finished our climb in the shadow of the Butterfield Peaks (at about 8,000 feet), stopping in a meadow to enjoy snacks, rest, and rehydration. The horses grazed and the dogs hung out in the shade. I switched the saddles to ride Jolene and placed the packsaddle on Pep.

So, figuring I had herd numbers working in my favor and seeking to alleviate the mule’s angst, I dropped Pep’s line and we headed homeward, down the mountain. Pep would surely follow.

Pep, however, did not tag along behind; she was perfectly happy to continue grazing. We – two riders, four equines, four dogs – rode 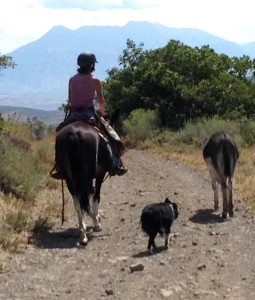 Myself, Wallace, and Jolene just before things went sideways.

out of sight, a half mile yonder. Pep still didn’t follow.

Jolene and I hustled back to retrieve her, with Wallace trotting along side. Raechel waited up ahead, just above a steep descent for which we would have to dismount and scrabble on foot over ledge and loose rock.

At this point, I’m growing impatient. Raechel and I had hoped to get home by early afternoon. Time’s a’ wastin’.

I grabbed Pep’s lead line and recommenced ponying her, this time at a trot. Jolene continued to get flustered. A few times, I awkwardly one-rein stopped her. You can imagine how silly this must have looked, trying to bend and stop a mule, while holding onto a frisky pony, and having a little burro in the mix.

— I should have taken the time to calm my mule.

— I should have dropped Pep’s line and let her follow at her leisure.

— I should have relaxed about the time, since rushing a horsemanship moment always, always ends badly.

Instead, I continued downhill at a trot. With Wallace and Pep right on her haunches, Jolene commenced to panic. With my hands full, the trail cramped, and my mind frazzled, things got ugly fast.

On the ground, I thought first of loose horses and then of whether I’d be able to get home. I seemed to have scrapes everywhere, my ribs hurt, and my right elbow was bubbling up oddly beneath the dirt and blood.

Raechel gathered the horses and had them ground tied or tied to trees within a minute. She rushed to my side and was the best First Responder a friend could have:

— No, you will not be standing up quite yet.

— Let’s have you sit in the shade.

— Let’s get those cuts washed off.

— Where else does it hurt?

— Drink some water and let’s assess the situation.

I was bloodied but not concussed. I thanked the heavens for my helmet.

With Raechel’s help, I put the pack saddle back on Jolene and alternated between riding Pep and walking the eight miles home.

It’ll take another week to heal from the scrapes and bruises. That’s considerably more time than it’s taken to learn (again) from my mistakes.

My partner, Steve Peters, winced and laughed after hearing about the event: “You know, Jolene is making some good progress. Despite your efforts,” he said.

Read a poem of the psychology of an exciting moment.

Posted in Emergencies, Mule, Not to Old to Learn.