The International Society for Equitation Science is to be applauded for espousing science-oriented work with horse care and management.

Drs. Paul McGreevy and Andrew McLean are integral figures at ISES. McGreevy is a past president. McLean is the current one. They’re two Australian professors steeped in the school of learning theory,

It’s the idea that animals learn to react to signals (cues from the rider) and they also give signals to their environment. Training works to diminish the effect of the environment as a control over the horse’s behavior.

“A horse that shies is simply more motivated by the environment than the aid,” says McLean.

Sounds good.
But some say learning theory is simplistic and restrictive.

Temple Grandin might be one of them.
In her book, Animals In Translation, she wrote critically about classical learning theory which assumes, for instance, that animals develop behaviors from direct experience. 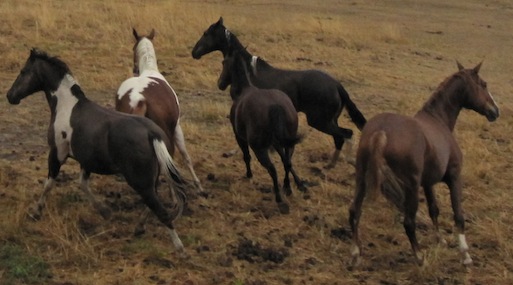 Grandin explains by writing about fears and natural phobias. For example, horses can learn to fear something simply by its herdmate being afraid of it.
Learning theorists would say the horse would need to experience something scary firsthand in order to be afraid.

“If you’re Mother Nature and you decide to set things up so everybody learns what to be afraid of through direct, hands-on personal experience, you’re going to lose a lot of animals,” wrote Grandin.

In other words, fear can be contagious.

Learning theory can’t explain this. Generally, learning theorists fail to consider working with a horse as a nonlinear equation, one that varies with the environment, with the individual horse, etc.

Thankfully, though, ISES is open to any research that “ultimately improves the welfare of horses in their association with humans.”