The practice of cross-tying and using halters in the pasture are two good ways to hurt a horse and two of my pet peeves. 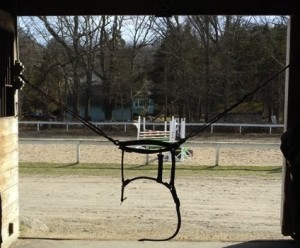 A horse might find it can escape pressure by going up, but that can yield tragic results.

It’s not hard to see why even calm horses can panic in crossties. Crosstie mechanics don’t allow the horse to investigate things by adjusting its head and putting both eyes on the pressure sources.

Last week I talked with a big time director in the horse world. She told me how sad she was at having to put down her faithful, steady trail horse after he injured himself on crossties. Argh.

Cross ties can be one of the most dangerous ways to tie a horse…According to the dictionary as written by the horse, cross ties are a gymnastic apparatus. 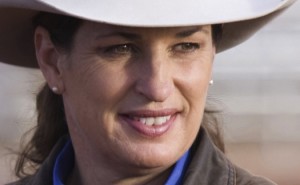 Never medicate, treat, fly spray or anything else that might cause a horse discomfort or alarm when he is tied hard and fast. Especially not in cross ties, which are after all, an apparatus for doing back flips. That would be dangerous and could initiate a catastrophic chain of events.
Warwick Schiller cautions that like horse trailers and spade bits, they’re no good for unprepared horses. I’d like to think tie bars would be a safer alternative. He talks about them in this YouTube video.

Schiller uses cross ties but prepares and teaches the horse about them first.

“The cross tie itself is not the problem, but a lack of preparation,” said Schiller. “Just like with most issues people have with their horses, their lack of preparation causes the issue, not the “thing” itself – trailer, lead change, cross ties, tie pole, collection, standing still, etc. etc.”