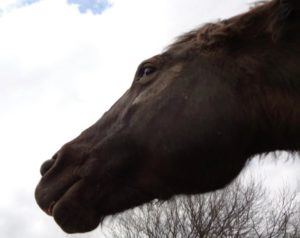 When it comes to working with horses, our very humanness can get us in trouble.

Take our use of language: Do you consider “negative” to be bad and “positive” to be good?

When working with horses, the opposite is often true.

Positive reinforcement is rewarding a subject when it acts or moves in the requested manner. Clicker training and training with 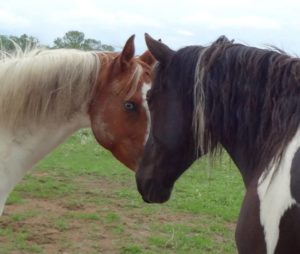 treats are examples of positive reinforcement. Watch this interpretation of it on the Big Bang Theory here.

Watch horses with horses. Watch almost any prey animal with any predator. In both instances, negative reinforcement is what you see.

Horses understand negative reinforcement and they understand the related idea of increased pressure, which Ray Hunt described as: “Be as soft as possible and as firm as necessary.”

The beauty of negative reinforcement is that the stimulus gets smaller and smaller as the horse learns what is being asked. The alpha mare will likely not need to double barrel the new horse again. A good ear pinning will yield a sufficient response. The new horse understands what comes after an ear pinning and will act to avoid that event. 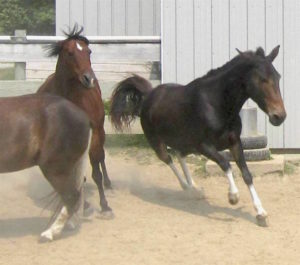 rider) until it becomes glaringly obvious.

“When it comes to negative reinforcement, there’s escape and avoidance,” said clinician Warwick Schiller. “Horses use mostly avoidance, but most people see only escape.”

Tiny shifts in leg, seat, and hand position can all be quickly and accurately interpreted by the horse as pressures. When the horse quietly and willingly reacts, it feels release.

“Negative” is not bad or cruel or mean here. It’s natural.

Here’s another red flag on being human: We tend to think in linear terms. Schools of thoughts and training models are all linear concepts. You do A and your result will be B.

But horse work is more like weather. It’s not linear or necessarily predictable. It relies on the ability to be in the moment, to adjust to different conditions and different horses, and to be able to think outside any scholarly box.

WiseAssWallace will have something to say about these ideas soon.