That was the impetus (Call it negative reinforcement!) behind the recent article on Horse Ownership.

At NickerNews and BestHorsePractices, we recognize that with the privilege of ownership comes the responsibility to keep our charges safe and sound and to prevent or at least minimize the suffering. 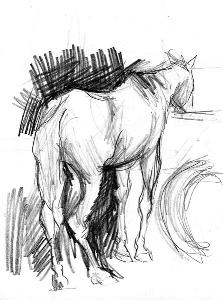 Not everyone toes the line:

There are serial offenders, like Maine’s Brett and Alexis Ingraham, who were convicted on several counts of animal cruelty in 2011. Read more here.

There are cases of ‘cruelty by necessity’ as Dr. Kate Schoenhals of South Mountain Equine called them. She witnessed those conditions while volunteering in Nicaragua and Mexico as a young large animal vet student. Poor treatment of equines there was largely linked to general poverty and lack of education, she said.

But much of the equine suffering we see here has stronger ties to ignorance, pride, and the age-old scenario of getting in over one’s head.

This month alone, I have witnessed two horse deaths due to owners’ lack of action. The horses lasted and suffered for days in critical condition while no vet was ever called.

Choose an excuse for their owners:

And then be honest:

Their owners were too cheap, too cowardly, too ignorant, too proud, or too callous to do the right thing.

Don’t get me wrong. I’m not in the keep ‘em alive at all costs camp. I have faced hard decisions with animals.

As owners, it’s our responsibility to mitigate misery. If there must be suffering, let it be swift.

So, on that delightful Day One, when we bring home that Dream Horse, that adorable pony, that friend and partner for life, let’s also bear in mind the final days.