Recently, Dr. Brian Burks, a veterinarian at Fox Run Equine Center in California posted a warning about puncture wounds to the hooves on Fox Run’s Facebook page. In short, he said horse owners should not attempt to remove the offending object. Check out his point of view (edited for brevity), followed by some contrasting insight from Dr. Jeff Warren, of Southwest Veterinary Service in Colorado.

When horses step on a nail, there are several vital structures beneath the sole that are easily penetrated by such objects. The area is not only physically damaged, but also contaminated with many different bacteria, including E. Coli and Clostridium tetani, causing septic processes and tetanus. 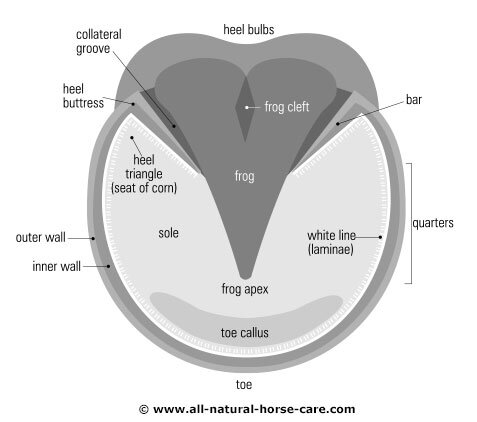 Courtesy of All Natural Horse Care

Nails can penetrate the bars, sole, and frog. There is enough force placed on the nail to cause the object to bend within the foot, traveling unexpected angles. This makes it impossible to know where the nail went inside the foot.

There are multiple vital structures that can be affected and/or penetrated. These include the third phalanx (coffin bone) the navicular bone and its associated bursa, the deep digital flexor tendon and its associated tendon sheath, the coffin joint, and several other ligaments within the hoof capsule. These inherently dirty objects can cause tetanus, or infection within whatever structure is affected.

If your horse steps on a nail, or other foreign object, resist the urge to pull it out of the foot. It may not appear to be much, or to be going a certain direction, but looks can be deceiving. Even half an inch is enough to reach the coffin bone in many horses.

The only way to determine the damage is through diagnostic imaging, which is much more difficult if the object has been removed. The primary means is by radiography.

Once the offending instrument is removed, it is exceedingly difficult to find the hole again, and impossible to know where it went within the hoof capsule. By leaving the object and having a radiograph taken, it can be determined where the nail went and what structure may be affected.

Apply a protective cover on the bottom of the foot to prevent further penetration is the nail is sticking out from the sole. This can be a roll of duct tape, boards, or PVC pipe taped onto the hoof. Attempt to prevent further contamination and call your veterinarian immediately! Waiting two or three days can allow devastating infection to occur.

It is also possible for a puncture to occur and leave no object behind. This can happen when a board comes down in the paddock and the horse steps on a nail, punctures the foot, then leaves the nail behind in the board as they lift their foot. It can also happen when a horse steps on one of the nails in their own shoe while in the process of accidentally pulling it off. 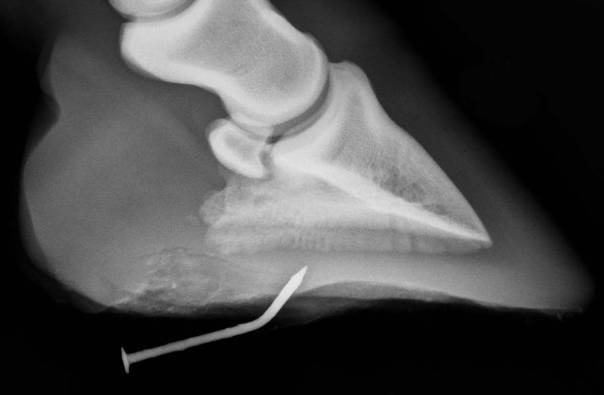 A foreign object that contacts the bone will cause immediate, obvious lameness. Other times, when a nail is removed or unknown to have been in the foot, the horse may not be obviously lame right away as it may take several days for infection to develop and build up a painful pressure within the affected structures.

Infection of the navicular bursa, or other local synovial structures, such as the tendon sheath and coffin joint can be life-threatening. Emergency care in the form of surgical lavage and broad-spectrum antibiotics systemically and locally are required to prevent permanent lameness and other complications. Delayed treatment worsens the prognosis, making identification of the involved structure and its treatment paramount.

The prognosis for recovery from a puncture wound depends upon immediate identification and treatment of the infected structures. It also varies with mechanical damage to the foot. Diligent care is required in all cases.

Dr. Jeff Warren recommends owner discretion rather than a blanket statement of “don’t pull it out!”

If the nail is in or near the frog, an understanding of the anatomy as well as the depth and direction of the nail can help evaluate the course of treatment. The vet can do that if he or she is called immediately, but passing on information about the direction and depth of the nail can be about as useful. Owners and vets can also assess the progress of a lameness after a puncture and treat accordingly.

It may become an expensive, painful problem. It may not. Owners should expect that the puncture will likely result in an abscess which could require regular hot soaks or necessitate more intervention.

Warren agrees that relaying as much information as possible to the vet and tending to immediate treatment is most prudent.