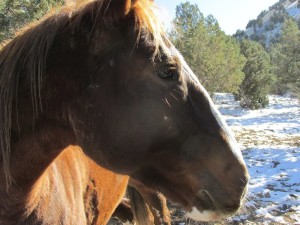 Our dear mustang and newest addition to the herd, Sackett, died on a dreadfully memorable day when Salt Lake’s airport and its major interstate were shut down due to a ferocious sand storm. Seventy-mile an hour winds whipped through the area, picking up sand, dirt, and making the skies as thick as a Maine fog.
I watched the storm through tears, knowing that these same granules of sand had led to the young gelding’s painful end.

My concern had begun a few days earlier. It was late in the day, a few hours after Steve had ridden Sackett with joy and without issue. When I tossed evening hay, he wasn’t his usual energetic self. I watched him eat, drink, and poop and considered it perhaps an off day.
The next morning, Sackett came more slowly up the hill. I took his temperature (101.2 degrees), listened for gut sounds (they

A winter image of Sackett, Wallace the burro, and Jodi

were minimal), and called the vet. We talked about his symptoms: lack of appetite and apparent discomfort. I gave him a half dose of Banamine. His slight fever declined, he moved more, and he ate some hay. He drank and pooped normally. I offered him a mash of bran, warm water, and molasses that he mostly ignored.
Later in the day, he and Wallace, the burro, had an adorable session of mutual wither scratching. I texted my vet: “Our boy seems to be doing a bit better.”
If only I’d known those bright hours were just blips on a radar soon to show a tragic and dramatic crash. Read more about colic here.

Sackett’s final 24 hours went like this:
His temperature climbed to 102.5 and he moved only with much encouragement. He drank and pooped some but was disinterested in hay or another bran mash. I placed cold, wet towels on him to try to keep down his fever.
Dr. Kate Schoenhals arrived that afternoon as his temperature rose to 104. She immediately performed a rectal exam and palpated a significant impaction. But it was still soft – with hydration, Banamine and time, it might pass. She inserted a tube and put at least a gallon of water into his stomach.
That evening, we transported him to the clinic for more blood work, intravenous therapy, and whatever else we could do for him. For twelve hours, his condition stayed relatively unchanged.
When I visited him in the morning, we walked dozens of circles around a small lawn. He moved more easily than the day before yet still with clear discomfort. With more medication on board, I remained hopeful and left for a quick errand. 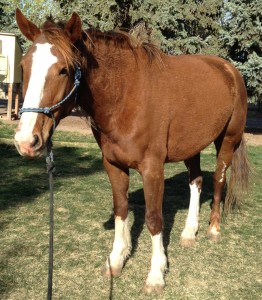 Sackett, a few hours before his death

Dr. Schoenhals called within the hour. His bloating (“abdominal distention”) was progressing by the moment; his condition was declining rapidly. I raced back.
Surgery, as we all agreed, was neither appropriate nor an option (even in straightforward cases, it’s hugely expensive and only sometimes successful.) We made the decision to euthanize immediately.
Sackett, the perky five year old who just days ago was confidently moving around his mares and lovingly receiving rubs from his burro buddy and from me, went down without a struggle.
Upon necropsy, we learned Sackett likely had been ingesting sand for months. The vet found about 20 pounds of sand, even rocks as big as kidney beans, in his gut. His digestive tract was thoroughly compromised with adhesions from his small intestine to his rectum. (Adhesions are the intestine’s response to injury, in this case, irritation from sand/rock ingestion.)
“By the time he told us, he’d already scraped up his intestines pretty good,” said Dr. Schoenhals. His angry, irritated intestines could have hosted a nasty infection, too.
He ruptured at the pelvic flexture, a common rupture site, where the colon takes a 180-degree turn and shrinks in size.

Gas-producing bacteria had escaped and filled his abdominal cavity. Thus, the bloating.

We’re trying to honor Sackett’s memory by learning from the nightmare and making changes to safe guard the health of his herdmates. Some lessons:

Like hoof abscesses, colics can fool you:
Education and experience taught me to look for these typical signs and symptoms of colic. Read more about colic here. Sackett showed some, but not others. His was an atypical sand colic. He never had diarrhea, for instance, a common red flag and something I treated Jolene for last year.

Horses have a wide range of stoicism:
Foals have a tendency for drama; you might see them down and flailing with the slightest pain. Mustangs, on the other hand, have a reputation for not showing their discomfort.

Could we be more pro-active?
Research shows I was doing the right things: feeding grass hay several times a day, offering ample turnout and easy access to water, minimizing grain intake (they were given alfalfa pellets and oats occasionally), and exercising and observing them daily.

Still, we could do more. Now, we have a dozen rubber mats and bunk feeders to get the hay off the ground. It won’t stop them from picking up sand as they nibble grass. But it will keep the hay cleaner.
We’ve also added psyllium to our regime. Psyllium (brand names include Sand Clear, Sand Free, Sand Rid) binds with sand and helps move it out of the gut. They will get a week’s worth of psyllium each month as a prophylactic.

I can’t bring Sackett back.
I can use the experience to become more sensitive and more knowledgeable. Despite the grief, hindsight, and self-doubt, I’m trying to see the silver lining. As my friend, Debbie Hight, reminded me: “Better to have loved and lost than to never have loved at all.”
Thank you, Sackett, for your gift of life. Rest in peace.