Earlier this month, we traveled to Livermore, Colorado, with Raechel Nelson and her 10-month old gelding, Gunner. 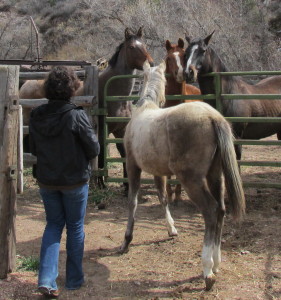 “To give him a chance to socialize with some other geldings and to give him some room to run around, stretch his legs and grow up without people in his face all the time,” said Nelson, who grew up in Livermore, a small northern Colorado town, and now practices dentistry in Utah. Read about Nelson’s DIY roundpen.

Check out facebook photos as Gunner adjusts to his new life at the family ranch.

Over several months, Nelson laid a solid foundation that included leading, negotiating different environments (natural and manmade challenges) and generally learning to keep a cool head when around dogs, cars, and random craziness.

Did she think the year in Livermore would set him back?

“I don’t think so. I think a good foundation is easy to come back to. It carries through,” replied Nelson.

As it happened, we had proof in the pudding.

We brought Nelson’s older gelding, Skeet, to keep Gunner’s mom company and to give the purposeful Nelson a spring project. A sturdy, handsome, 14-year old roan (1,200 pounds), Skeeter hasn’t been ridden for years.

I thought he might have acquired some crummy habits. I thought there’d be drama. Not so.

“In my experience, you can come back years later. They still have manners and good fundamentals,” said Nelson, who has started several colts.

Steve Peters got in a first ride, first reviewing some ground work before swinging aboard. 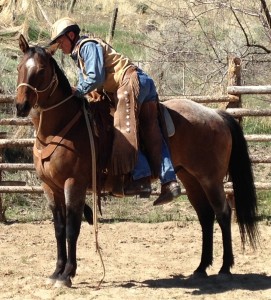