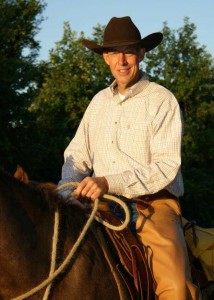 Many years ago, Jim Thomas had a moment.

He was trailer loading a young horse, a Christmas gift for his daughter, Emily. He tried every trick in the book to get this six-month filly loaded:

“The more we pushed, the more she resisted,” recalled Thomas.

After two hours of those forceful, aggressive methods he’d learned and used as a younger man, he stepped back and considered a videotape he’d recently watched.

“Let’s see if this works,” said the North Carolina man.

The gentler method – which emphasizes pressure and release, the notion that horses seek comfort, and is often called Natural Horsemanship – had her in the trailer thirty minutes later.

“That’s when I dug a hole and buried the old style of working with horses. The pride got swallowed. From that point forward, I was trying to understand horses from their perspective,” said Thomas.

For many years, the tall, lean 56-year old traveled an educational journey, acquiring new skills and improvements from scores of clinicians.

He’s learned from Buck Brannaman, Clinton Anderson, Craig Cameron, Martin Black, and many others. For months at a time, the retired Army and 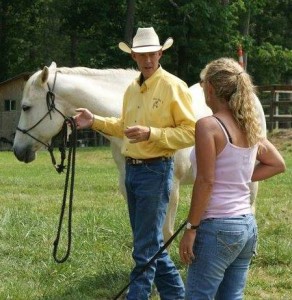 National Guardsman dedicated himself full-time to improving and, as he says, “trying to forget more than try to remember” those old ways of grabbing a bigger stick, bigger rope, or bigger bit to solve training issues.

Now, Thomas excels at passing on these gentler methods. He has a strong following in his home state of North Carolina and frequently travels out of state to give clinics. He’s worked with scores of mustangs and starts dozens of colts annually.

His clinics aren’t like others. There’s a whole lot of fun, along with the learning.
“The entire day is full of laughter. Nobody needs to get ashamed or embarrassed. Oftentimes, I’m 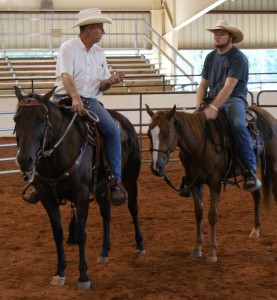 pointing the finger at myself and laughing or I might say, ‘Your horse is trying so hard, in spite of you.’”

Great horsemen can struggle with people skills. But Thomas served as a military recruiter for years. He’s worked in sales.

“I made my living talking,” he said with a chuckle. “When you see that someone’s not getting it, you need to start talking in a different way, not louder. You learn to watch people to make sure they understand. I really focus on that.”