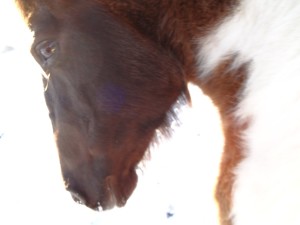 I love her dearly, but after those experiences, I stopped riding her. For several months, she was the one left behind.

This mare – so full of life, so willing to go – was another one of those supposed “lost causes” referred to in the recent article on Bolting.

Then, I got help.
My significant other, Steve Peters, suggested I direct her instead of pulling back on both reins.
So simple.

But resisting the impulse to restrain-through-reins is harder than it sounds. It involves detangling muscle-memory and mental habits long ingrained over years of novice riding.

After reading The Power of Habit by Charles Duhigg, I know why it’s so hard: you literally have to bypass old neural pathways and create new ones in your brain.

While my horse’s auto-response to anything peripherally scary was movement, my response to her response was constraint.

This had to stop. 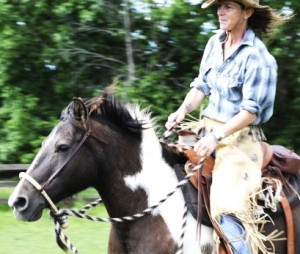 I learned to relax and hold on. I learned to steer instead of trying to shut her down. We connected. My cues and our rapport got good enough for us to move from a snaffle to a bosal.

As I so often realize: the problem was with me, not her. I needed more skill and more confidence to go with it. (Again, simpler than it sounds.)

My name is Maddy.
And I’m getting better.