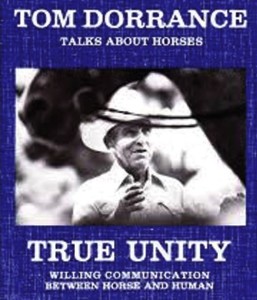 When we consider improvements to horsemanship, the wisdom of Bill and Tom Dorrance resonates powerfully and universally across all disciplines. For the Dorrances, it wasn’t about English or Western, dressage or reining. It was about getting with the horse.

What you might learn from the Dorrances was a “manner of learning whose subject was nominally the horse but that extended itself in surprising directions to include dogs, cattle, and people,” wrote Verlyn Klinkenborg in the New York Times.

Their techniques were rooted in observation and humility.

Bill Dorrance passed away in 1999; Tom died in 2003. Only a handful of men and women got to spend considerable time with these Oregon-born, California men. For these protégées, the Dorrance years were life-altering.

Read interview with Bill’s son, Steve Dorrance, along with his wife, Leslie.

Shouldn’t these student memories be celebrated and recorded for posterity? 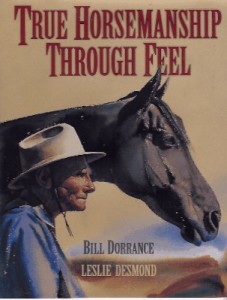 That was the plea I brought to the folks at Western Folklife in the middle of 2013. Western Folklife puts on the National Cowboy Poetry Gathering, an eclectic exposition of cowboy lore and artistry.

What better place to present a Dorrance remembrance?

Over several months, Western Folklife put the pieces of this idea together, creating a format and inviting guests.

On a snowy January day in the G Three Bar Theater, four men and one woman shared their treasured memories to a standing-room only crowd. Over the 90-minute session, it became clear the Dorrances weren’t just interested in making them better with horses. They wanted them to be better at life, too. 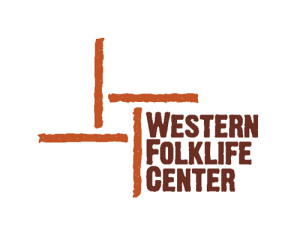 Ellen Eckstein: international dressage rider based in Templeton, California, who studied for many years with Tom. Read more.

Bryan Neubert: a well-known clinician who lived near the Dorrances in Salinas, California, and worked for years with Bill and Tom. Read more.

Thomas Petit Marvel: a cowboy-turned-pilot who worked nearby on the 25 Ranch and as a young cowboy knew the Dorrances. 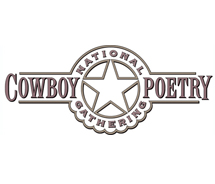 Here are highlights from the Dorrance roundtable. Published with permission from Western Folklife.

Bill got me to start to see things, to observe things and to slow down. I was just in a hurry about everything.

There were so many things he would observe.

We’d go to town for groceries. He’d have me drive his ‘65 Impala to Star Market …He’d have me park near the sidewalk and I was trying to figure out why…I’d come back and he’d say, you know that one feller, the way he moved down the street, he’d look pretty good on a horse.

And I thought, my God, when does he ever quit thinking about it? 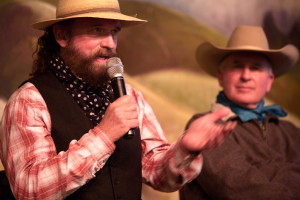 He liked to get you interested…He started to let me see that there was nothing ordinary at all.

Bryan said, ‘Hell, they were all here last year.”

So he set me off on a course of trying to see the special thing in every horse. I can’t begin to thank him enough for how he changed my life in a beautiful way.

I met Bill’s boys in high school. I really wanted to find somebody to help me with horse work…I didn’t know he knew a thing about horses…He was just another rancher. 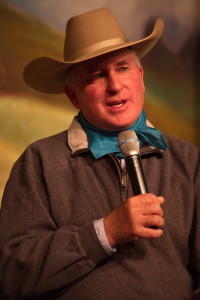 I said, have you ever shown horses? Did you win these?

I don’t really want to go into how he changed my life. This isn’t about me. But I have no idea where I would have been or what I would have done if I hadn’t have met them… It totally changed things.

He was the most sensitive, nicest person I’d ever met.

All the presenters recalled the memory and genius of the Dorrance brothers. Here, Randy Rieman recalls a moment with Tom.

It was five years after his 80th birthday party and he met a man.

He said, ‘I believe I do remember you. You were at my 80th birthday party.’

There were 30 or 40 horses and people at this clinic to celebrate his 80th birthday…The guy was just amazed that Tom remembered.

‘Yeah, I think you had a 2-year old sorrel filly,’ said Tom. 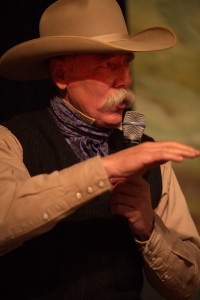 And Tom said, ‘But you didn’t own that horse. A woman from Washington owned that horse. ‘

And Tom said, ‘and you’re a horseshoer from Washington, aren’t you?’

That was an example of Tom’s memory.

Bryan recalled Tom’s memory, too, when they were working in Hollister, California, in the 60s. They were responsible for 19 horses and were each riding several per day.

And he talked about how that horse was progressing all through those rides. I mean, a lot of times I can’t remember what I had for breakfast. He talked about the importance of your progress and in your ability to remember and observe and compare. And he darn sure had that.

Ray Hunt got Tom to go to Bozeman to do a clinic. There was a woman there. He said, ‘I’ve seen you before.’ He didn’t say he’d met her.

The next day, he said to her: “Could you have been in a beauty contest that would have been on national television? 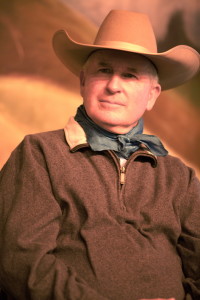 She said, “Well, I was Miss Montana in the Miss America contest 10 years ago.

Before I knew him, I would contest his memory. I’d go on weekends and just take a horse or two…He’d say, ‘I guess it’s been seven weeks since you were here last?’

I’d say, ‘I don’t think it’s been that long.’  Like, if I had known him better I would never say that.

‘Well let’s figure it out:

Weekend before that we went to town.

Weekend before that I went up to Bill’s

Weekend before that I stayed home.

Weekend before that I stayed home

Weekend before that so-and-so came.

Weekend before that you were here.’

I said, ‘I guess it has been seven weeks.’

Tom and Bill were alike in so many ways but they were really different, too…If you asked Tom something, he would answer with something like ‘the oxen is slow but the earth is patient. “ It was so vague. If you asked Bill the same question, he would say, “Put your left foot here and take your right hand…” It was so different.

But here’s a way they were similar: 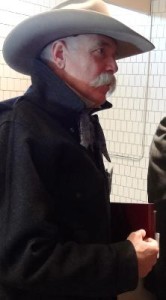 We were braiding in Bill’s rawhide room and Margaret, Tom’s wife, was riding around the barnyard. And we’re in there braiding. Bill’s got his head down. I’ve got my head down.

We hear this big splat out in the barnyard and without looking up, Bill says, ‘sounds like Margaret’s come off her horse.’

I peek out there and sure enough, Margaret was on the ground, in pain. So Bill grabbed his cane and off we went. Bill says, “Did your horse get out from under you, Margaret?”

“Can you move your legs?” asks Bill.

So Tom pulled up on his golf cart and he says, “Did your horse get out from under you?

“Are you all right?”

And Tom said, “Can you move your legs?”

I was thinking, aside from just being brilliant and passionate about horses what really set these guys apart was they had such a non-adversarial  approach and they had incredible compassion for the horse and the people.

It got pretty warm.

Super frustrated, he just looked at Bill and he said ‘how long is this supposed to take?’ Bill chuckled and said, “I don’t know about you, but I got from now on.” 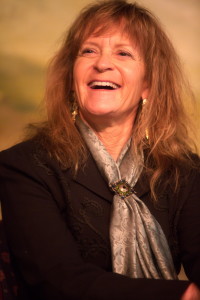 Many people don’t know it but Tom was a show-off.

He rode over and said, “You can go to town and back between strides with that horse, he said, “that’s what you want.”

Tom just did not spend money.

I saw that he resoled boots with tires. He’d used a grinder and all the nail holes had been counter sunk.

Once someone asked him what kind of boots he liked.

He said, “I have a strict criteria I follow when I pick out boots.”

“Cheapest ones on the rack.”

In a lot of ways, Bill was setting me up just the way he was setting up his horses. There was no difference between them:

I’d leave and as soon as I got out the gate, the first thing I was thinking about was ‘when do I get to go back?’ It was a good feeling that I got up there.

Randy talks about his getting a job starting colts at the Parker Ranch in Hawaii, one of the biggest ranches in the country.

“I had a chance to go ride some colts out at this place. The feller didn’t know me so he was trying to call a couple references. So I used Bryan Neubert and Bill Dorrance.

That was his reference.

The next day Bill said, ‘Feller called here wanting to know if you could do the job. I was kinda tempted to tell him ‘no’ because I’m gonna lose my rawhide partner.’

Bill’s rawhide room was a treasure house and I just loved being in there.

I was so proud to get to braiding these reatas. I wanted to give one to Bill to say Thank You for teaching me. This reata was 90 feet. I’d worked real hard on it.

If you know anything about a reata…it’s four strands of rawhide. Each strand is about a quarter-inch wide. Every quarter inch, there’s a cross…Over 92 feet, there’s quarter-inch crosses.

I handed it to Bill.

See, there are two sides, a flesh side and a hair side and they are hard to distinguish.  In 10 seconds, over 90 feet of rope, he spotted that one spot. It stuck out like somebody’s thumb. 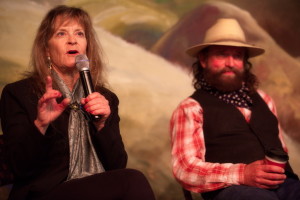 I learned about balance and straightness from Tom. 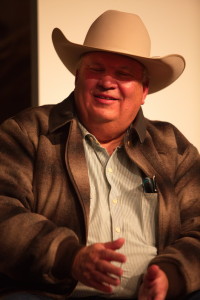 The one thing I wanted to impart on everyone here is the influences the Dorrances have had on my life, over my lifetime.  It’s made me a far better person. I not only learned a better feel with horses. I was an aviator. And I learned the feel of airplanes. Learned the feel with people. I was tremendously lucky and proud that I got to know and work with the Dorrances.

It’s pretty obvious how much we adored these men and how much they did for us, inside and out.

At the round table conclusion, Randy Rieman read a letter from Margaret Dorrance. It reads in part:

“It’s been 11 years since Tom passed and although he’s gone physically I think a lot of us still feel his presence in our lives. He never set out to change the world but he sure made a lot of difference to a lot of people in their lives and of course in the lives of many horses.

I always thought he was something special but then that’s why I married him. But seriously, I never thought he would make such an impact either. He was just being himself, which I think is part of the reason he’s had such an impact in the horse world. Even though he had such great success at understanding what the horse thought and reacted to things, Tom was always searching for a better way.

If today he was successful in something with the horse, then tomorrow he was thinking about how he might make that easier or better for the horse. He was constantly searching and working things out and that was one of the reasons I think he was so extraordinary.