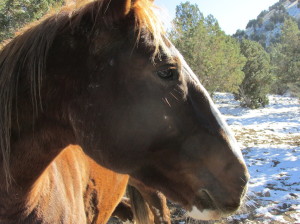 We recently added another horse and a half to our herd.

Sackett is a five-year-old gelding from the Maverick-Medicine Herd Management Area, southeast of Elko, Nevada. He was kept for a time at the Utah State Prison in Gunnison (where until recently the state ran a cooperative gentling and training program with the BLM) before being turned over to veteran colt and mustang trainer, Mario Johnson. 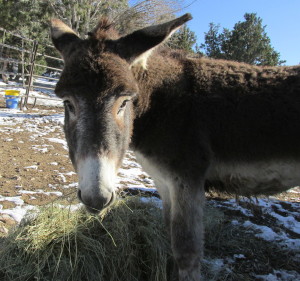 Johnson worked with Sackett for 100 days and competed with him at the Impact of the Horse event in Heber City, UT, placing third in the Mustang Mega event.

Wallace is an untouched, two-year-old gelded burro from the BLM’s Axtell, Utah facility.

Both were auctioned at the conclusion of the Impact of the Horse. Read more about that here.

Adding them to our herd was one of those Big Decisions we mulled over and tossed back and forth for some time. We considered:

At $7 per bale, purchasing additional hay was one of the most costly matters. Feeding our herd would now cost over $5,000 per year.

Also, with every horse comes the increased risk that someone will need a vet’s attention. At a minimum, it would cost a few hundred extra dollars to pay for annual vet visits. 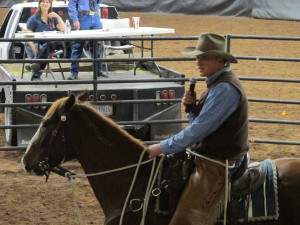 As Dr. Kate Schoenhals noted in this article on Ownership, it’s a lifetime commitment. That means assessing our ability to care for them not just THIS year, but for the next 20 years. We’re old enough to have some resources and horse handling experience while still being young enough to likely outlive our charges. 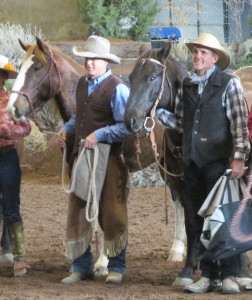 Adopting a mustang or burro can be a hazardous undertaking. Self-preservation is their mantra and no amount of good will or fuzzy affection will have them suddenly melting in your arms. It takes large amounts of skill, patience, consistency, and then more skill to work with these animals. Even if they have been handled, veteran trainer Mario Johnson reminded us, ‘they’re still mustangs.’

West Taylor, this year’s Impact reserve champion, owns eight mustangs and told me it’s crucial to be extra attentive with them. “If you’re not there to be their partner, they will own you,” he said.

Their wildness and size played a large part in our decision to obtain a mustang with a few months of experienced handling. We have some skill, but we’re not invincible teenagers. Nor do we have the facility requirements for an unstarted mustang (namely, a sturdy roundpen with six-foot walls). The BLM relaxes their standards slightly for trained mustangs.

Having considered these pros and cons, we took a deep, mutual breath and said YES. It’s an exciting time and one that opens up plenty of learning opportunities. And we’re happy to have relieved the Wild Horse and Burro program of two of its 57,000 equines in holding.

Welcoming and introducing the new guys to our herd has been eventful. Sackett and Wallace are sharing a corral and shelter that sits within the girls’ larger pasture space. The arrangement allows them to see, smell and touch noses with each other. As time and handling progress, they’ll be turned out together.

Not wanting to lose any of the excellent start Mario Johnson gave Sackett, Steve has already ridden the dark sorrel gelding several times. He’s well-mannered but can still get nervous and spooky on the trail. There have been occasional moments of bolting and bucking. Handling his feet can be challenging. But he stands and leads beautifully.

Wallace is another story. Read more about that here.