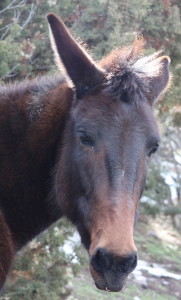 Smiling through gritted teeth, I’m making some progress with the mule. Like a lot of paths of progress, it has its bumps, hazards, and hairpin turns.

Most recently, Jolene gave me a lesson in pressure. As I learned months ago, pressure with the new mule needs to be light and sensitive. And I’m not just talking about lead line or rein pressure. She showed me how light pressure of presence needed to be with a recent saddling incident.

I had Jolene on a lead line and was readying saddle and saddle pad. She was antsy and I asked Steve and a friend to block her from having an escape route.

The guys, both really good with horses, were relaxed and non-threatening. More like Cowboy A, than Cowboy B (at right). They stood a few yards away as I struggled to position her near a gate.

Jolene eyed them suspiciously. (She eyes pretty much everyone suspiciously.) Her discomfort at having them nearer, from twenty feet to ten feet, became too much. From a standing position, to get away from the pressure of these two men, she vaulted over the pasture gate.

Is she part kangaroo?

Apparently, mules excel at standing jumps. They compete in Coon Jumping; it’s a popular tradition, especially in the South and stems from when raccoon-hunting mule riders would drape a blanket or tarp over the top wire of a barbed wire fence and ask their mules to jump it instead of finding the gate and losing time. This I did not know. Watch record-setting coon jump video.

I eventually got her saddled, but the guys had to back off. Slowly, the whole saddling-up process has gone from 90 minutes to 30 minutes. But like anything else, it can be two steps forward, one step back. Or over.