Therapeutic riding, equine-assisted therapy, equine-facilitated learning – they’re cousins in a family of programs that formalizes what us horse owners appreciate every day: working and being around horses is good for your health.

Now, in a careful, cautious examination, Dr. Patricia Pendry of Washington State University becomes the first to scientifically nail down exactly what we mean by “horses are good for the soul.” Pendry’s work, published in a journal of the American Psychological Association, cited a wide range of published scientific work, including meta analyses and more than 45 related research studies.  Read more about what makes good science.

“What’s great about this study is that it studied a fairly large group of students and the measurement of cortisol levels was a simple measurement that was not disability or age dependent,” said Sarah Bronson, executive director of Riding To The Top, a Maine therapeutic riding center. “Often times in this industry the sample sizes are so small and so diverse that it’s difficult to capture statistically significant data.”

Pendry and her colleagues studied the effect of equine-facilitated learning (EFL) on middle-school aged children. In particular, the WSU group measured cortisol levels (what we commonly call the “stress hormone”) of children who spent time with horses and compared them to those who didn’t.

Participants in the EFL program had significantly lower cortisol levels than the kids who didn’t participate, the researchers found.

What exactly were kids doing?

More than fifty boys and girls participated in weekly, 90-minute sessions at a PATH to Success program affiliated with the People-Pet Partnership at the College of Veterinary Medicine at Washington State University. The control group was waitlisted. Their cortisol levels were monitored over the same 11-week period (They participated in the EFL program at a later date.)

During the sessions, kids worked on horsemanship skills while also participating in activities such as breathing in rhythm with the horse, not talking with other humans, and ‘being mindful of the experience of touching the horse and feeling its warmth,’ said the WSU report in Human-Animal Interaction Bulletin. Read it here. 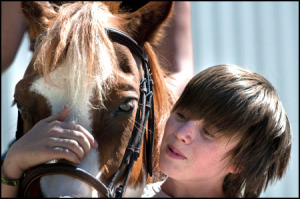 Researchers obtained samples of saliva by having the children spit into straws. From the saliva samples, they were able to measure cortisol levels.

Why is this study so important?

In today’s evidence-based world, anecdotal testimony only goes so far. With this study, more non-horse folks will likely appreciate the benefits of working and playing with equines.

For years Dr. Temple Grandin, a pioneer in the humane treatment of livestock as well as someone with autism, has urged parents to get kids off computers and 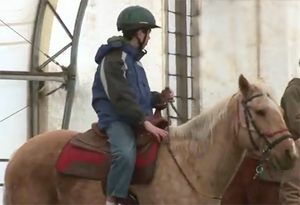 onto the farm. But her advice has been personal; her own research has focused on how to improve animal lives, not human ones. Now, however, the Colorado State University scientist has the evidence to support her personal experience and intuition. Read more about Grandin here.

Higher cortisol levels can lead to stress-related disorders in adolescents; any number of physical and mental health problems can arise. Lower stress levels may be “more adaptive and thus make for a protective influence against the development of later psychopathology,” the WSU report stated.

While the study did not measure oxytocin (what we call the ‘feel good’ neurochemical), it did cite other studies that have shown that interactions with animals generally increase levels of oxytocin. This chemical, in turn, has been shown to suppress the production of cortisol.

Good for parents and advocates:

For teachers or parents wanting to enroll children in equine therapy or learning programs, there will be evidence to support their decision.

When these equine programs seek support from organizations and funders, they’ll have some proof of the efficacy of their work.

Insurers will likely be more willing to pay for the sessions.

Added Bronson at Riding To The Top:

“It gives us a bit more traction when we are writing grants or talking to prospective donors.  Some foundations and donors really want to know about the “science” of what we are doing. I am confident that there will be more published, high quality research studies, like the WSU study, in the coming years that will validate what those of us who work and live with horses have known in our hearts for years–that horses do indeed improve quality of life on so many levels.”

Or, as Pendry wrote:

“The findings give greater credence to the claim of therapeutic horsemanship professionals, participants and parents who have reported significant positive effects of EFL programs first hand. Faced with skepticism about the efficacy of equine facilitated programs by potential funders and third party payers, they can now point to causal effects on physiological outcomes associated with current and future physical and mental health.”

Read of a more casual kind of therapy.