Editor’s Note: After our airing of Episode 10 and Dr. Tucker’s No Grain Challenge, we heard from listener Karen McPeak. She is a Midwestern native now living in the South. She has been involved with horses since her parents gave her a pony for Christmas in 1961 and has a passion for Thoroughbreds. A life-long learner, she is focused on operant conditioning and equine behavior theory, thanks to Remy who challenged everything she thought she knew about horses.

For decades I had horses that generally didn’t get sick or injured. They lived out nearly 24/7 on my small farm, in a mixed herd, with occasional shifts in the herd dynamic and minimal drama. They had pasture, shelter, good hay, and basic oat-based feed. I socialized with my vet, trainers, and coaches, and I had known my farrier since high school. My hay supplier was next door. I was on the board of our county Horse Council. Looking back, I had it too easy. When life got busy in the 1990s, I paused my horse life, coming back to it about seven years ago after moving out of state. Everything had changed. 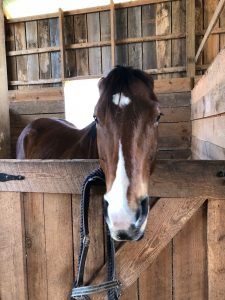 Living in a metro area, I had to board and felt awkward. I didn’t know vets or farriers, or the guys at the feed store, let alone where the feed store even was. I had to drive an hour to see my new horse. I couldn’t make decisions that used to be in my control. I was an average, experienced amateur with knowledge that no longer seemed relevant, at the mercy of people I didn’t know, in an environment I didn’t recognize.

Within two years my mare was suddenly gone, taken out by a freak pasture injury, living her last week in a vet hospital (a month after I let her insurance lapse because I thought it was unnecessary). I was tapped out physically, emotionally, and financially. Not the happy version of horse ownership I remembered.

Was I going to live without a horse? Oh, hell no. I was better prepared. I knew stuff. The universe laughed and handed me Remy, a four year-old gelding with a racing injury, an excellent prognosis, and a lot of secrets. His breeder gave him to me. I called the insurance agent.

Our first two years were…interesting. Remy was super when outside of the barn. Inside, he was angry and occasionally dangerous. I was very familiar with thoroughbreds but had never met one like him. My reflexes became remarkably fast for a woman on the backside of middle age. It was second nature to caution people around him, even when he was friendly.

He was intermittently and mysteriously lame on different legs. He lost and gained weight. He began to look weak but potbellied. He began to crib. I had him examined by multiple vets, consulted certified behaviorists, called trainers, and ordered therapies and diagnostics. I tried supplements. I was fried and frustrated. I had promised his breeder I would give him a good home, so I dug in.

I considered removing grain after doing a deep dive into nutrition and the equine digestive process. For nearly a year I educated myself through various sources. I fretted over hay quantity and quality. Then Remy colicked. My vet sent us flying to the hospital on a Sunday. At five the next morning, the attending vet called to say he needed surgery. I asked if I should just let him go. Surgery was successful and he came home a week later with 72 staples along his midline. He looked like hell. Ten days later, he colicked again.

After his initial recovery I moved him to a barn with better grazing. I held my breath and started a properly balanced, grain-free diet. No one on his healthcare team recommended that, surprisingly, but they agreed when I told them. I felt like I was finally driving the bus.

He slowly improved. He looked better, but was still prone to colic. His attitude was better, but not completely reliable. Others denigrated him and I felt demoralized. After reaching a high of one colic a week, I had him scoped, scanned, and tested. Again everything fell within normal ranges. After more research, I added a hindgut supplement, Vitamin E, and magnesium. His free movement and posture improved. His attitude swung into the pleasant column.

One day as I sat on a mounting block watching him explore, he came over, rested his chin on my shoulder and took a nap. I remained immobile for 15 minutes, almost tearful.

We’re now at a lovely, quiet farm where he has freedom, friends, and forage. I still hold my breath if he seems sensitive. I’ve learned more in the past four years than I knew in the previous four decades. I saved my horse. Now I know some stuff.