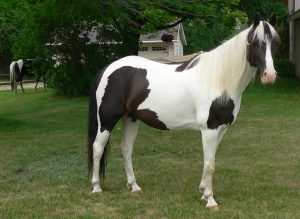 Bandit after a bath

We have a scintillating coaches’ corner with Jec and Amy Skinner. Amy is a trainer and Best Horse Practices Summit presenter based in North Carolina. Here, the two discuss a saddling concern sent in by a listener in Michigan:

“When Bandit, a Missouri Foxtrotter, joined our little herd a few years ago, he showed us that he didn’t like the saddle. I spent some time his first winter working on a sort of desensitizing: plopping the thing on him over and over until he gave no reaction. It could be that he was “trained” by someone strapping a saddle on him and letting him buck until he quit. Early on we reached his previous trainer who said that Bandit “had a mind of his own so you need to let him know who is in charge.”

Whatever the case, I decided to go back and let him express what the problem was. Previous saddlings may have been “successful” because he would sort of check out with his eyes half-closed.

But later, when letting him explore more, we saw some pretty fierce biting and kicking, first at the saddle pad and then at the saddle…” 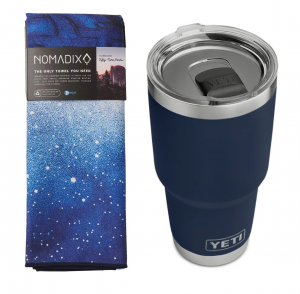 We’re giving away freebies! Check our landing page for details.

I think Art and our listeners will find excellent insight from this episode.

Check out the website for freebies from Yeti and Nomadix. Details found here.

Even though this Coaches’ Corner is about saddling, it’s also about seemingly isolated concerns — maybe it’s saddling or being tied or hobbling or going in and out of gates.

We can often see that those bigger issues can be broken down to smaller concerns. Paying attention is key. When we observe and experiment with what helps, when we allow ourselves and our horses to make mistakes, progress often follows. By the way, I love mistakes. Being wrong is something I’m good at. Read related keynote address on Why Being Wrong is Advantageous.

We would like to thank title sponsors, Pharm Aloe Equine and Lucerne Farms as well as Redmond Equine, Kate’s Real Food and Patagonia WorkWear for their continuing support. Please follow these brands and buy their stuff as they support us and what we’re doing.

Don’t forget to check out our site for freebies and details.

We heard from Karen after this podcast aired. She writes:

Just sending a comment about this episode. I get a lot out of most of the presentations, but the ones that have a direct link to my own situation are always of particular interest–like this one.

My horse came to me directly from his breeder and straight off the track. I’ve had him for four years. He came with a host of undisclosed handling-based (in the barn only) behavior issues, almost all of which we’ve resolved and he’s a pretty happy camper these days. But, he still reacts to saddling like the horse noted in the podcast, some days more insistent than others. Some days not at all but those are rare. I’ve backed up the process much the way Amy noted, and I’ve had him thoroughly checked by my vet and bodyworkers. I even invested in a custom saddle that can be adjusted a dozen ways from Sunday. Since he is a very light, easy, and happy horse to ride and is always willing to try, I’ve assumed saddling is a memory issue, knowing how TBs are saddled at the track, and he’s a great one for hanging on to past experiences. I appreciated hearing Amy say that memory can be a factor and that what she recommends is what I’ve followed, but I suspect I sometimes forget to take adequate time or so to let him prepare, even though it feels like I have. Some days he’d prefer I just get on with it and taking too much time makes it worse. The reminder to read the horse or give him a chance to think, is a good one. 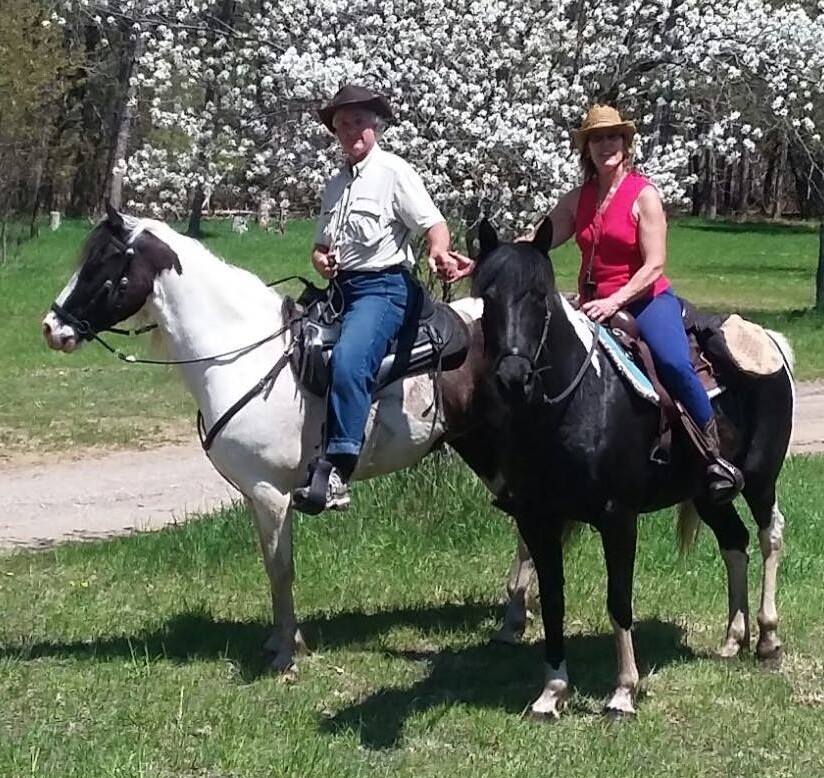 Art (on Bandit) and his wife on a springtime ride