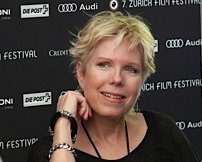 She paused and spoke with NickerNews and BestHorsePractices to address the complexity of the mustang message:

“We’re trying to get a real holistic look at the mustang issue, from all sides, not necessarily to point any fingers, but just to explain it.

The whole nine yards. It’s a misunderstood issue because you hear sound bites.

I don’t think most people know all the facts about exactly what the process is. So we’re trying to do a ton of research and make a really clear picture for the audience without taking sides.
I think if there was ever a crisis in the mustang world, it’s now. And certainly, it’s been brewing for a very long time.”

Read review of NAS study on wild mustangs and burros.

Meehl and a film crew from her Cedar Creek Productions traveled to the National Wild Horse and Burro Advisory Board in Washington, D.C., earlier this month and interviewed attendees, adding to some 400 hours of footage.

“I don’t know that we see a great answer anywhere but I’m adamant about people not jumping to conclusions based on one news report they heard. It’s been misunderstood…I don’t want to say ‘misrepresented’ but I think it’s often not a holistic view,” said Meehl.