A recent trail incident provided some timely relevance to our recent discussion of whip use.

Comet and I went for a solo trail ride. We got off the road and into the woods only to be bombarded by deer flies.
Since I was a girl, I’ve grabbed long twigs as impromptu fly whisks. This ride was no different. I pulled up to a tree and broke off a leafy branch.

Comet was fine with standing still while I snapped off the two-foot length. But it was another story when she saw that I now held a stick-like implement. She spun and fussed and bounced around. I let her move and took some time to show her my intentions.

With the flies as bad as they were, it didn’t take long for her to understand. Those gentle, leafy touches on her poll and neck meant relief not punishment.

When we got back home, I talked with Steve, who has owned her for seven years. Before that, he witnessed her previous owner get after her with a stick. It was just one of several abusive implements the man regularly used. 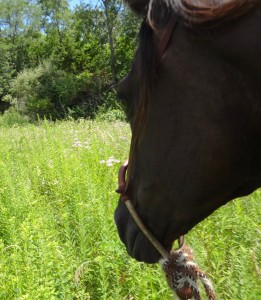 Since then, she hadn’t had any such object raised against her.

But horses have a tendency not to forget. Perhaps that should be considered when weighing the effect of whip use and carriage.

Posted in General and tagged ises research, whip use.