Editor’s Note: Amy Skinner is a regular guest columnist and has been a horse gal since age six. She owns Essence Horsemanship, rides and teaches English and Western at Jim Thomas’ Bar T Ranch in Pittsboro, North Carolina. Skinner 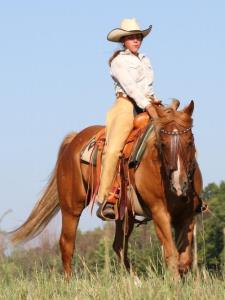 has studied at the Royal Andalusian School of Equestrian Art in Spain, with Buck Brannaman, Leslie Desmond, Brent Graef, Thomas, and many others.

In the philosophy of horsemanship following Ray Hunt and Tom and Bill Dorrance, there is a common saying that you make the right thing easy and the wrong thing hard.  The hope is that the horse will pick up our idea and that we can go along together.
But if we aren’t forcing horses to do anything and if we are also allowing them to make decisions, occasionally “no” will come up as an answer.  It’s at this point that real horsemen and women are made. There are many out there putting on cowboy hats and talking philosophy, talking about not making the horse be a slave, talking about physical and mental lightness.  But when presented with “no” as an answer from the horse, the real horsemen and horsewomen get to pondering, not forcing.

At this point we need to analyze the piece that isn’t working.  Once we’ve identified the “why,” to the “no,” we can go back 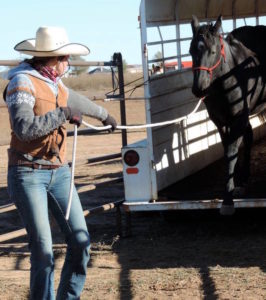 down the line a bit and work to create a horse that feels confident in trying to seek what we’re seeking, or to decide whether what we seek is appropriate for him at all.

Here are a few reasons a horse could say no:

— It could be the horse lacks confidence.

If, for example, we ask him to go on a trail ride and leave the farm when his sense of security comes from his friends and the barn, then leaving without the tools to cope would be too much.  He would need more foundation to draw on.  One might get a “no” here. Perhaps one might initially ask for smaller, easier tasks that he can succeed at and build toward the big task.

— It could be the horse doesn’t understand your request.

If your position or cues are muddy, choppy, unclear, or poorly timed, the horse would have no idea what to do with the conflicting information. The “no” might simply be a “huh??”

— If what you ask brings up the horse’s need to defend himself up, his answer could be “no.”

Horses value safety first and foremost, and if what you ask interferes with their need to stay safe, “no” would be the obvious answer.  It could also be that your way of asking brings about their self preservation, or perhaps the horse has a pattern of feeling the need to defend himself from previous experiences with that ask.

— The horse lacks overall respect in its handler, and/or human makes guidelines sloppy or unclear.

You can see this a lot in trailer loading or leading up to a mounting block: the person asks the horse to lead up straight but the horse swings his hind end around away from the desired area.  If the person waits till the horse is already crooked, they have waited too long and the horse has received a release for going to this place, which they will build on.  At this point the horse believes that is where he should be and continues to do it, but better.  So your “no” is not really a no to what you want, but a yes to what you inadvertently asked for. 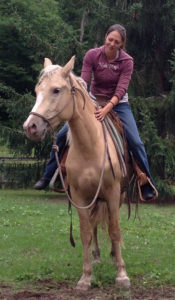 If we are going to create thoughtful horses with honest answers, we need to look at our foundation when these situations come up. And they will.

Have we given the horse enough experience to do what we ask?

Have we given him confidence?

Have we refined our timing to and skill enough to be sure what we ask is clear to him?

Have we taught him to fight or to try, to think, and are we patient enough to wait for him to find it himself, instead of making him?

If we seek lightness, it can’t be forced. It must be mental before it can be physical, which means never forcing a “yes.”