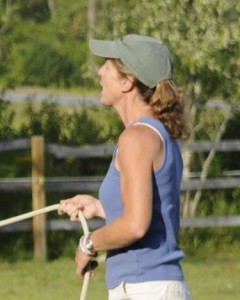 Researchers are starting to examine voice and its impact on equine behavior.

[Do they deserve an ‘Ivory Tower’ label? Read more here.]

When you talk with your horse, does he listen?

In one study at Nottingham Trent University, researchers identified voice as a “modality” or a way in which we communicate a command. Other modalities could be visual (waving a hand or flag) or tactile (direct pressure on the mouth, side, seat, etc.).
Researchers studied 20 horses as they worked on transitions from a stop to walk, walk to trot, and then those same transitions in reverse.

In other words, does your voice make any difference when asking a horse to speed up or slow down?

They found that horses directed by more than one modality (bit pressure and voice cues) catch on more quickly at first. But as training continues, researchers found horses do just as well without the voice modality.

Voice cues, we are led to believe, could be ineffective and unnecessary.

In another study, scientists from Delaware, Michigan, Germany, and Italy, collaborated to test the effect of harsh versus soft voice tones when asking a horse to cross a tarp.

They found it doesn’t matter which tone is used. 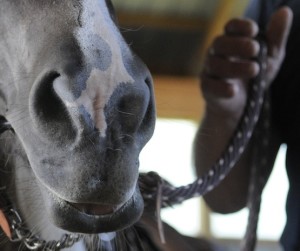 These scientific efforts make sense and are fine contributions to our horse knowledge, especially if considered in concert with our own experiences and observations.

We know, for instance, that wild horses learn to associate sounds with good or bad consequences through direct experience or through the reaction of their herd mates. (Think of predator sounds, storm sounds, flowing water sounds, etc.)

But in domestic life, horses quickly learn that a lot of sounds don’t matter at all and have no impact on their well-being. (Think of passing garbage trucks, on-site construction noise, screaming kids passing by.) Watch video on trail riding distractions here.

But, of course, as horse owners, we know voice or sound can matter if it is part of a regime. Horses can learn to associate it with the more direct cues of pressure and release. Or even simple cause and effect, like when you call them in from the pasture for feed.

For what they were really testing if you read their report, is multi-modality versus single-modality learning. In other words, teaching a horse with a combination of cues, then gradually eliminating some to refine the message. Well-trained horses learn to react to cues that are more and more subtle.

At my barn, for example, every cue but the voice has been eliminated in some situations: 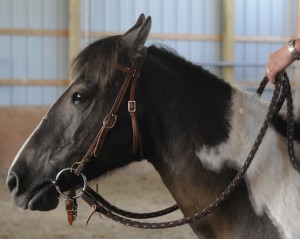 Hundreds of times, they have heard “Tssst” quickly followed by the light pressure of the lead line, asking them to step back.

By now, they no longer require tactile pressure to respond. A ‘tssst’ is enough.

I let it out when I want my horse to slow down. Initially, she heard my sigh in conjunction with a more relaxed, less forward body position, plus the touch of a rein.

Now, she’ll slow down when I sigh. (But if I’m yammering away to a friend, she’ll pay attention to tactile cue instead!)

Nonetheless, voice cues are harder to pass on consistently from one rider to the next than rein pressure or leg pressure. That might explain why most accomplished trainers don’t use them.

A canine sidebar on voice cues:

Belle is about eight years old. For the first year, I could say the word “walk” without consequence. But after a while, she 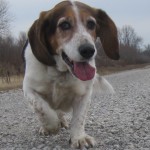 connected the word with a really good time. Saying “walk” whipped her up. She’d bark and spin around, desperate to get started.
To avoid the circus, I started spelling it out when I needed to tell family where I was headed.

Now, she recognizes the spelling.

Does that mean she’s learned to spell?