More than a month after an EF-5 tornado ripped apart Moore, Oklahoma, Dr. Clayton McCook paused to reflect on the damage, the recovery, and the prospects. 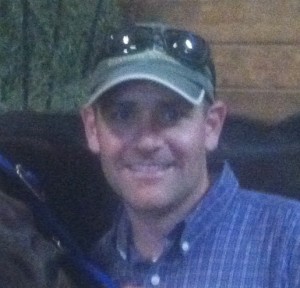 EF-5 is a Level 5 tornado on the Enhanced Fujita scale; it is the highest level, with “incredible” damage and winds over 200 miles per hour.

McCook, an Oklahoma resident and Texas native, told me that from his observations and experience nothing above ground can survive an EF-5.

“The only people who survived were underground,” he said.
His acquaintance saw 12 horses pulled up into the sky, like so many plastic grocery bags.
“He told me the cloud sucked them up into the air,” said McCook.

Short of building an underground equine bunker or evacuating instantaneously, McCook said there’s not a lot one can do aside from attaching contact information to them (microchipping, paint, safety halter).

Some horses got lucky as the tornado skirted their pastures. Dozens are still hospitalized or in foster care.

As many Moore horse owners had their homes reduced to concrete slabs, they may never be in a position to take back their large animals.
McCook and Dan Mullenix are developing the non-profit Oklahoma Livestock First Responder team. When the Moore tornado hit, OLFR rescued, treated, and transported scores of horses from devastated grounds to places like Heritage Park, a local racetrack which opened its doors to these newly homeless equines.

Read about their heroic efforts here.

Now, as recovery efforts proceed, some horses are feeling the impact of a new stress: confinement.

It can be hard on any horse to be in a stall, but those used to paddocks and fields struggle more. Blue, the mare in photo on right, 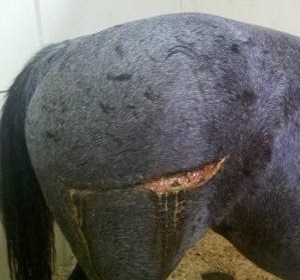 Blue, a mare injured in tornado, recovers but is starting to weave in her stall.

started weaving a few weeks ago.

“I told them, ‘We’ve got to get her out of here… These horses will need to move out of stalls,’” he said.