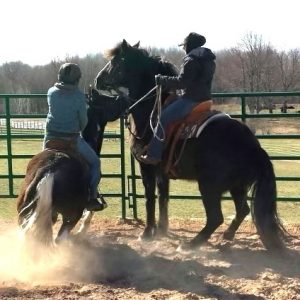 Editor’s Note: Amy Skinner is a regular guest columnist and has been a horse gal since age six. She has presented twice at the Best Horse Practices Summit and is the author of To Catch a Horse: Finding the Heart of your Horsemanship.

She rides and teaches dressage and Western. Skinner has studied at the Royal Andalusian School of Equestrian Art in Spain, with Brent Graef, Leslie Desmond, and many others. Visit her website here.

So you have a horse who crowds…what can you do?

When you are trying to fill a hole, the first priority is to stop digging. In other words, the most important part of correcting poor behaviors is to stop doing the things that create them. Identify triggers that create pushing behavior and eliminate them.

Understand that your horse is behaving according to their preparation and following habits that have likely been reinforced every day for some time. 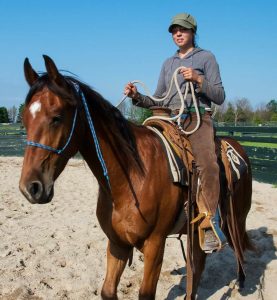 If you’ve got a pocket full of treats and you know it’s going to turn your horse into an anxious, nosy mess, maybe find a way to express your affection in a way that calms instead of having it fuel anxiety.

Does petting their face cause them to push?

Instead, pet quietly and softly on their neck or shoulder in slow strokes, so as to not agitate. Many pushy horses are used to being touched right on the face, in quick, agitating movements. This will quickly inspire pushing, nipping, and bother. As a general rule, I tend to stay away from playing with lips and I avoid petting faces while they are in “recovery.”

Don’t create confrontation, but do be clear.

Don’t wait until your horse has moved you 10 steps backward before doing something about it. What you release is what you reward. If the horse is released for pushing, then pushing is what they will do. It’s how training works. It’s better to prevent than to fix something after the fact, so if you feel your horse edging closer, don’t wait until they’re on your toes. Redirect them before they get on top of you. This requires your total attention. 100 percent.

Be mindful. Many lessons with pushy horses involve an owner who is chatting away and unable to notice their horse’s needs. The horse fidgets, worries, moves about, and the handler’s attention only comes to the horse when the horse exhibits behavior that’s undesirable. 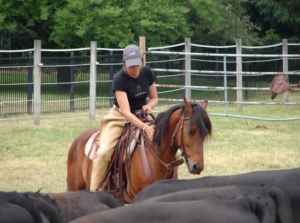 Don’t just tell them what you DON’T want. Tell them what you DO want. Give them tasks they can accomplish. If they’re fidgety, take them for a walk. Pushy horses will often revert to pushing when anxious or frustrated because it’s what they know. Giving them something to do, that they can focus on and achieve, will help.

Again, this requires your attention. If it’s acceptable to push at feeding time, on the way out the gate, when bridling or haltering, why would it suddenly make sense to stop being pushy when you’re ready to focus on training? Everything means something for the bigger picture.

Again, no need to be confrontational. If you need to turn around, make it a turn on the haunches (where the hindquarters stay in place and shoulders move away). Make your daily tasks functional in this way, instead of slogging around mindlessly from point A to point B. Have a task in mind. Be flexible in its execution if they get frustrated, but try to make movement constructive. 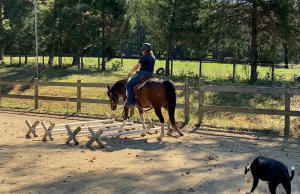 Turn them out in a well-socialized herd.

Let them learn from other horses: how to move away when appropriate and how to find peace in every interaction. Often pushy horses are extremely unconfident in a herd. I define a herd here as a group of horses that runs, eats, sleeps, and moves about together. I can’t say enough how invaluable this experience is for a horse, especially if they’ve missed this when they were young. Get them out of the stall where energy builds up (and can turn quickly to frustration) and let them graze and move like a horse was intended to.

If you really struggle to move them parallel to you (instead of constantly on top of you), set up obstacles to lead them over. I’m partial to having them lead next to me over poles because it gives them a clear place to be and eliminates the fight. I’ve gone as far as leading from the other side of a fence (them on one side and me on the other), and often teach leading from horseback (ponying with intention) on a reliable saddle horse. 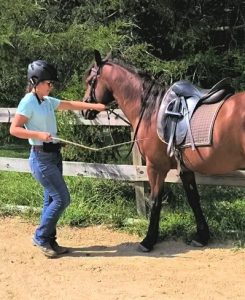 It’s worth it to perfect the horse’s understanding of the lead rope’s meaning for the accurate placement of their feet (as opposed to just being a “dope on a rope” as I often call them – horses who just drag on lines or walk mindlessly behind you). You can make a huge change in their mind set. Many horses who crowd have been encouraged to be on top of people and don’t understand why their nearness is unwanted.

Stand aside, not in front.

People often crowd horses by standing directly in front of them. This presentation not only encourages a horse to crowd back, but many horses find it offensive and show their objection by pushing. Sometimes I think horses just want a little peace. Try standing at their shoulder or ribs. Give their heads some room and stand beside them. If they turn to nose you and can’t stop fidgeting with your pockets, try taking the lead rope up over their head so it’s on the opposite side and hold it there. That way if they turn toward you the lead rope straightens them, instead of you having to make a big ugly correction.

Be clear and disciplined.

Be clear about how you expect them to move in an out of gates, stalls, trailers, at feeding time, at the mounting block, etc. The best course of action is to not make the horse wrong, resentful, afraid, or fearful of making a mistake: after all, someone or many someones taught them this precise behavior, intentionally or unintentionally. They are just doing what they know.

Instead of a big fuss, make the change in little details done well and done often. Be consistent.

Above all, be MINDFUL.

Don’t tune out your horse and be upset at how they fill in your lack of guidance with what they already know.