Not everyone thinks cowboys are the pillars of good horsemanship. In some quarters, they have a historical reputation of neglectful, even abusive handling and care. 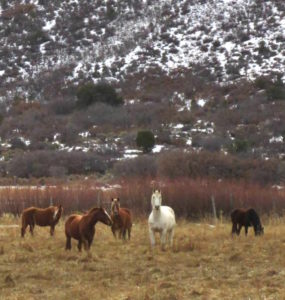 But as an observer of several years, I can testify to the contrary. Indeed, on average, I’ve seen better care out here in the West than I have in New England. (My status as proud Maine native notwithstanding.)

As Elijah Moore, a Utah horseman who’s lived in Maine for 30 years, told me once: folks in the East love their horses to death.

These are all management and care decisions that go against “what nature intended.” The strategies also go against what current research tells us is best. Martin Black and Dr. Steve Peters, co-authors of Evidence-Based Horsemanship, will discuss best practices at their November 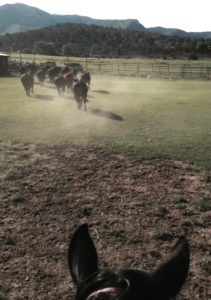 There are, of course, plenty of New Englanders who keep their horses simply and naturally. But I’ve found those owners almost apologetic that their routine is so low maintenance. One Maine acquaintance called her care “affectionate neglect,” as if her neighbors thought spending more time and money would necessarily be better for horses.

There is no apology here:

I had the privilege of helping move cattle several times this summer. I experienced first hand what every clinician tells me: jobs can benefit the horse and rider partnership tremendously. Indeed, side-passing, galloping, long trotting, quick starts and stops all came more easily when the focus was on something else. 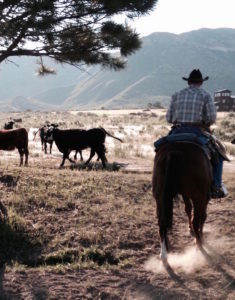 Cow work demands mindfulness and an ability to adjust to what each situation brings you. Last weekend, I headed out with my friend, Tom, to move about fifty head. He said, “I don’t have a plan.”

Tom did have a plan, of course, but what he expressed was the need to make spontaneous choices and changes depending on the cows, the road traffic, and whatever else came up.

Being in the moment is an essential aspect of successful horsemanship. Just ask WiseAssWallace.

I chatted with Peters and Black about it. Coincidentally, Peters had just reviewed research for his day job as a neuropsychologist for Intermountain Healthcare. He said humans generally take one of three approaches to accomplish a task:

Not surprisingly, he said, the greatest number of hospital errors occurs with a rules-based approach. Black said he sees the same pattern with horsemanship successes and failures.

My friend, Tom? He clearly uses the knowledge-based approach.