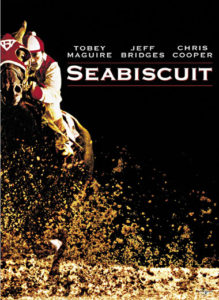 I watched the film adaptation of Seabiscuit, the brilliant book about the overachieving little thoroughbred racehorse by Laura Hillenbrand. It stars Chris Cooper, Jeff Bridges, Toby Maquire and several bay Seabiscuit lookalikes. A great flick for horse lovers who may, like me, will spot good and bad horsemanship points.

— Hot walking (walking around and around while attached to an overhead, metal, spinning device)

— Halters on all the time, even in stalls or fields (Even ‘field safe’ halters are unsafe. Plus, it 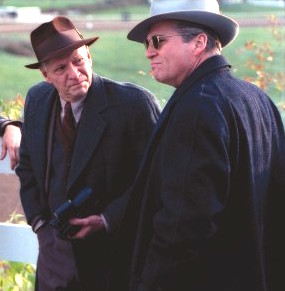 Chris Cooper and Jeff Bridges in the movie Seabiscuit

shows they don’t know how to catch a horse.) Read more on that here.

There are many scenes which show how much trainer Tom Smith did things right. In one example, Charles Howard (who will buy Seabiscuit later in the movie) approaches Smith as he’s tending a horse with a leg injury. Smith had saved the horse from imminent death (He was about to be shot by race track officials.)

Howard: Will he get better?

Smith: Already is, a little.

Howard: Will he race?

Smith: No. Not that one.

Howard: So why are you fixing him?

Smith: ‘Cause I can. Every horse is good for something. He could be a cart horse or a lead pony. And he’s still nice to look at. You don’t throw a whole life away just ‘cause he’s banged up a little.

After Howard acquires Seabiscuit, it becomes clear the little horse is troubled and traumatized. He kicks down stalls, reacts 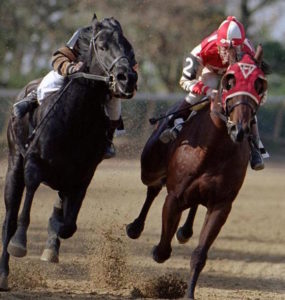 Fictional Seabiscuit and War Admiral in the famous match race.

ferociously to jockeys, and weaves around the track.

Smith: He’s so beat up I just can’t tell what he’s like. I just can’t help feeling that they got him so screwed up running in a circle that he’s forgotten what he was born to do. He just needs to learn how to be a horse again.

The trainer’s solution is to let jockey Red Pollard ride him for long stretches out in fields and down country lanes. Through their gentle, positive training and rehabilitation, Seabiscuit rediscovers his speed, direction, and competitive drive.

One more scene reminds us of horses’ superior night vision. Before the historic match race with War Admiral, Smith asks Pollard to race Seabiscuit around the track in the middle of the night, in pitch dark.

Pollard: Yeah, but I can’t see out there.

Smith: That’s alright. He can.

You bet! Horses do well at night. Read more here.

Posted in General and tagged Seabiscuit.