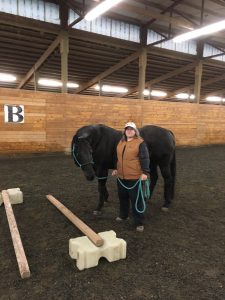 Cathi and Velvet journey through rehab

A few months back, Cathi Champion emailed us a Listener Question for our podcast. Listen and read more here. It concerned the long-term rehabilitation of her quarter horse mare. Jec had some great suggestions.

We recently checked in with Cathi, a Best Horse Practices Summit steering committee member, to see how things were doing.

I’m happy to provide an update! First, I should have mentioned in my initial question that Velvet is boarded, so multiple daily trips to the barn are not in the cards. But we have been doing well with the rehab. She is a calm, 15-year-old, very well-trained Quarter Horse. She’s not a mare-ish (if that is really a thing beyond human prejudice) mare. She is not the type to freak out at being in a stall and, for the most part, she respects our partnership. She is still a horse, though. On stall rest with just these short walks for six months now, I don’t blame her for the occasional “airs above the ground,” or as my friend Bev calls them: errors above the ground.

I did buy Jec’s 55 Corrective Exercises book for new ideas. It’s always good to get new points of view, especially if they are in the same vein as the training I prefer. These podcasts have shown me that Jec falls in that category. I’ve been encouraged by her podcast answer, and the book, to take Velvet out on our basic obstacles, to set up poles in the arena, train for leg yielding and side-passing in hand, and to generally push the boundaries a bit for tendon health and mental health.

The feet off the ground that I mentioned is happening now that I’ve added some jogging to the rehab program. She’s more like a bouncy kid than anything else. She respectfully turns her hind end away and sort of jumps for joy that we might be running. I wish I could let her go, but the vet suggests we could end up starting all over. This six-months grind is not something I wish to repeat. The week of icing alone was hell for both of us! She seems to be in fine fitness, but that may be due to medications and no weight on her back. So, we are trying to be patient. 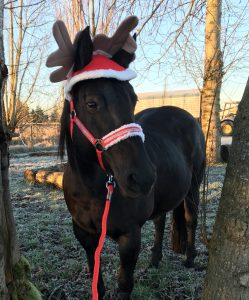 Taking the walking outside is our biggest challenge and the one that spurred me to ask the original question about how to plan and manage for when I get back on her. I’ve got it on the ground work, thanks to her being a smart and willing partner. However, when we get outside, she just wants to go go go.

Over the seven years I’ve been riding, my biggest challenge has been to slow her feet and have us feel each gait. She’s already a fast walker and a forward thinker, but now she just sees opportunity when we are outside. Opportunity to eat green grass, run through fields, and generally be a horse. Can’t fault her for that, but the walks are full of backing and resetting and reminding that we are doing the same work as inside. It’s an internal farm road so it’s safe enough, but she can see, smell and feel green everywhere around. Keeping a handle on it is especially challenging because the whole move-the-hind-end thing is pretty much off the table as I don’t want her to be silly in a pivot and reinjure the foot.

The point was taken from Jec’s response, though: Leadership is the key. I even get on the mounting block and lay over her back to remind her that I will be on her. Soon, I plan to start putting a saddle on to remind her back muscles about carrying weight. 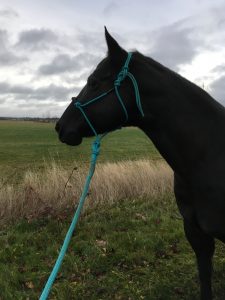 Another outing for the quarter horse mare

In the end, though, I’m a retired project manager who thinks ahead and is all about risk mitigation. I just don’t want our first ride to be too much of a circus. I believe it will be business as usual, but I want to think about all that I might do to prepare her for the behavior that will be safest for us both.

Speaking of podcasts, I was listening to Hidden Brain, an episode called “Moral Combat.” It talked about how hard it is to hear other points of view once you think you have the right answer, and especially when one thinks they have the moral high ground. I was compelled by the idea that once you think you are so sure you are right, that you can’t listen.

Perhaps the best thing I’ve learned from owning, researching, and becoming passionate about horses is to be in the moment, that nothing before or after matters as much as right now, that every living thing has some sort of brain process, and that my love of lifelong learning just got deeper and more meaningful.