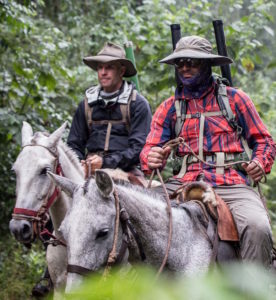 Alas, the story inside made no mention of riding. We assume the pretty steeds delivered the men to a remote fishing location in Argentina. But who knows? From a rider’s perspective, the company, Patagonia, was only using the horses as props.

But the incongruity serves to highlight one of my biggest concerns as a horsewoman and a outdoor recreationalist: in the outdoor community – among mountain bikers especially – riders don’t rate. We get no respect on the trail or in the trade. You’re just fine as props, they seem to say.

More respect and understanding in the form of collaboration and trail etiquette would benefit all parties. 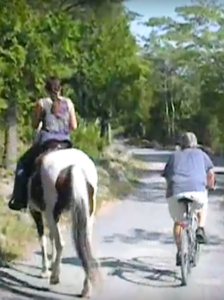 Along with about 27,000 attendees, I’ve been attending the Outdoor Retailer (OR) event in Salt Lake City for years. It’s a major buying event for retailers and a major networking event for everyone else.

I wear cowboy boots and jeans and explain my vantage point: 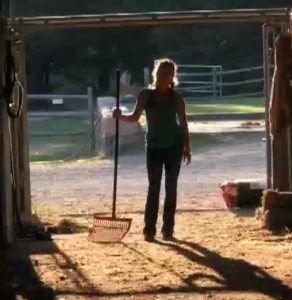 As horse owners, we tend to work outside every day. We’re smart and spend good money.

After the event, the Outdoor Foundation sends out emails to survey the types of recreationalists attending the OR. There are dozens of activities to check, including skateboarding, bird watching, and car camping. Horse riding is not listed. [number here on riders]

Other outdoor folks write off riders, despite the fact that historically we pioneered the trails and routes that they (hikers, mountain bikers, ATV riders, and runners) now populate.

I visited with the president of a Utah non-profit, dedicated to improving trail systems, especially for mountain bikers. She snorted when I mentioned the need for collaboration with the horse riding community. Horses, she said, were simply hazards and pooping machines.

Mountain bikers can evoke the flight or fight response in horses because they approach quickly and silently, like predators. Bikers, riders, and horses can all get hurt. Think about the car damage a moose can cause. Now, take away the car.

The worst place for mountain bike/horse incidents is in the wilderness surrounding Seattle, said Back Country Horsemen of America executive director, Jim McGarvey. 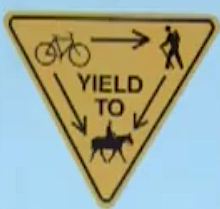 “The 28-year old know-it-all’s: they have an attitude that’s kind of bad,” said McGarvey. As the elevation and grade increase, so do biker speed and the potential for dangerous encounters, said McGarvey, whose 174 chapters spent over 300,000 volunteer hours doing trail maintenance on public lands last year.

Education and advocacy have been uphill battles, so to speak. When we see mountain bikers, it’s best to bushwhack off the trail immediately because most lack trail courtesy.

This attitude and practice stands in stark contrast to policy in places like Acadia National Park in Maine where hikers and bikers yield to equestrians.

“Being a back country outfitter requires a certain amount of knowledge and experience. They’re a rare breed,” said Corey Simpson, with a tone of admiration. The Patagonia public relations representative said the cover image was “simply a great shot and not intended as a prop to entice readers.“

Some say we’re a rare and vanishing breed. Three generations ago, everyone had a horse or two. Now, even ranchers and wildlife biologists are swapping them for quads. It’s admittedly hard for young people to jump up in the saddle if they haven’t grown up horse-y. The entry point for committing to a bike is lower, educationally, emotionally, and financially.

Nonetheless, we’re still out there. In three Western states (New Mexico, California, Colorado) surveyed by the Humane Society, a total of a half million horses are used recreationally. And someday riding may be your only option for accessing remote country, as those fly fishing Patagonia boys discovered.

Greater understanding from fellow trekkers could reduce resentment and injury on all sides. We could move forward issues of mutual concern, like trail maintenance, search and rescue, and access to public land and open space.

For the sake of the wilderness, can you show some respect and get to know us? And to mountain bikers, specifically: please slow down and be nice.